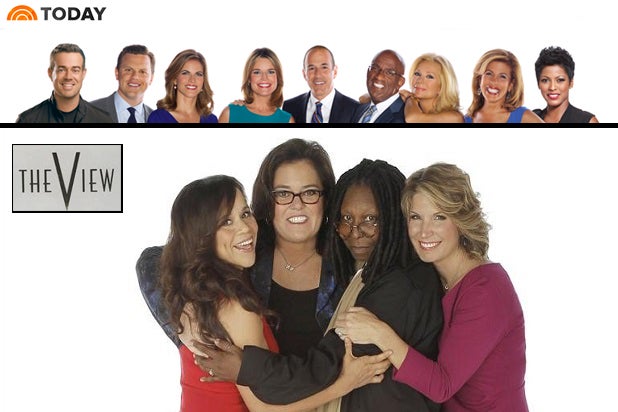 ABC’s “The View” returned this week with moderator Whoopi Goldberg back in her seat after a hiatus for a bulging disc in her back, during which time the show saw a rotating roster of guest panelists and reports of co-host Rosie Perez on her way out. To add insult to injury, CBS gabfest “The Talk” beat the ABC program in total viewers for the first time in its 18-season history — 2.95 million vs. 2.88 million, respectively.

To be fair, “The Talk”— which doesn’t air head-to-head with “The View”— had an advantage. The aforementioned Goldberg was out the entire week and “The View” was preempted on the east coast and central time zone on Friday, January 9th as ABC News broke in to cover the Charlie Hebdo standoff.

But in this hypercompetitive media landscape, a win is a win.

Ratings for “The View” have remained mostly unchanged from last season, down two percent in total viewers for the 2014-2015 season-to-date compared to September 2013-January 2014.

ABC executives had grand visions this season for reigniting buzz surrounding the trailblazing female talk show – and spiking its ratings.  In September, the show brought back lighting rod Rosie O’Donnell and added President George W. Bush and Sarah Palin’s former communications aide Nicolle Wallace, and the proud-to-be-loud actress Rosie Perez to join Whoopi Goldberg.  With these moving parts came the biggest change of all—for the first time since its debut in 1997, Barbara Walters was gone as the show’s linchpin.

The networks banked on the new panel to reinvigorate a show that had lost significant ratings ground compared to just a few years ago, when Joy Behar and Elisabeth Hasselbeck along with Rosie O’Donnell and Barbara Walters were creating viral moments in their sleep. But the new ensemble of co-hosts hasn’t been the juggernaut ABC expected.

Looking at a different genre, it wasn’t so long ago that ABC’s “Good Morning America” was slowly making gains on the reigning champion “Today” show. Those gains turned into a morning show reversal in 2012, when GMA toppled “Today,” never looking back since. Following the Ann Curry disaster, “Today” made changes since, inserting Savannah Guthrie as co-host alongside Matt Lauer, and adding features like the social-media-based “Orange Room,” but remains in second place.

Because in TV, once you fall behind, it’s a long climb back to the mountaintop.

Beyond the competition between “The View” and “The Talk,” the more worrisome battle for ABC lies between The View and The View of yesteryear. Five months into the new view, the show hasn’t taken a plunge in the ratings, but isn’t surging either.

“What resonates with our viewers is the chemistry of our co-hosts and the always lively conversation,” an ABC spokesperson told TheWrap.  “We are proud of our panel of strong, diverse, exceptional women.  After 18 years, the View continues to be a constant topic of conversation which reinforces the popularity of the show and the strength of the brand.”

TheWrap spoke to several TV and branding experts to dissect what’s preventing this cast from taking off. Here is what’s missing.

1. Conflict
“Did Iraq attack us Elisabeth?” Rosie O’Donnell asked Elisabeth Hasselbeck. “This is a political discussion—don’t interview each other, just say what you mean,” the ever feisty Joy Behar interjected.”

“Iraq didn’t attack us!” O’Donnell screamed at Hasselbeck’s way. “Why is this personal, there’s a war going on out there!” Behar interjected again as the referee. “Excuse me, let me speak!” Hasselbeck shot back at Rosie. “Do not call me a coward Rosie!” Hasselbeck screamed with her finger waving while Behar and Sherri Shepherd got up. “That’s it!” comedian Behar belched.

Whether you enjoy TV screaming matches or not, ones like this are hard to turn away from.

“Conflict is not only needed when writing a script, but it is essential for marketing and branding successful TV show,” TV and marketing expert John Tantillo said. “Viewers loved ‘The View” when there was on-air  tension and the outcome was unpredictable.”

Tantillo suggests a more civil tone among panelists might make for a nice atmosphere, but not for great ratings:

“This is the basis of good TV and the secret to strong ratings—what will they say next? This has been lost to on-air civility rather than live pathos.”

2. Casting
Part of creating number one is having the right human pieces to spark the match. Media critics have been mixed on Nicolle Wallace, with some observers liking her reasoned tone and ability to agree without being disagreeable. But others have suggested that’s the problem, as playing nice doesn’t make for great TV.

Then there’s Rosie Perez, who’s been missing in action for a weeks as she prepares for her role in Larry David‘s Broadway show. The Puerto Rican actress—who is expected to leave the show— is politically active (President Obama appointed her to the Presidential Advisory Council on HIV/AIDS), but didn’t seem to be providing must-watch opinions on hot topics like the protests in Ferguson or the avalanche of allegations against Bill Cosby.

“Talk shows rest on the conceit that talk is inherently fascinating, when in reality, television talk is extremely dependent on casting,” Jeffrey P. Jones, Director of The Peabody Awards, told TheWrap. “And in television, it’s really helpful for a show to cast people who the viewers either love or love to hate.”

Jones noted in the talk format, it’s a must for talkers to push people’s buttons when driving home their points, noting successful examples like Bill Maher vs. Ann Coulter [Politically Incorrect] where it was “easy to love or hate them both.”

“Elisabeth [Hasselbeck] was spectacular in both these regards, and it seems her talents are somewhat underutilized in the more monochromatic “Fox & Friends.”

Perez returns to the show February 3rd—we’ll see if she comes firing back out of the gate.

If you watch “The View,” the best segment is typically right out of the gate, as the ladies talk and debate the biggest political and cultural stories of the day. Those segments are the ones that usually go viral on sites like this one and all over the web. But religious viewers will observe the show moves away from those hot topics quickly, moving to lighter topics like fashion, pop culture, and relationships in the first 20 minutes.

Daytime TV is certainly monopolized by a female audience, so no need to toss away the aforementioned features. But there’s also no reason to move to them too quickly, when interest viewers’ interest in hot political and cultural debates are at an all-time high in a highly-charged social media era. Which brings us to…

“The key to a successful revamp of “The View” would be to feature aspirational women who also have a large social following and who every generation of women can relate to,” Amy Palmer, Founder of PowerwomenTV, said. “Women who are socially engaged—have large Instagram followers, who are active on Twitter, is what ABC needs to look at; they need to look at women who other women look up to, in fashion, in beauty, in business, and family.”

Palmer added the show is stuck in the past, not seeing that viewers now want something different: “The View is stuck in an old formula where as the new woman wants the new version of “The View,” and for me it’s all about women you can connect with on a visceral level.”

5. There’s a Live Studio Audience for a Reason
The new trend in media is breaking the barrier between talent and viewers. From digital programs like HuffPost Live inviting commenters on to the show to legacy TV news outlets booking everyday Americans as guests to share their stories—the days of anchorman and hosts as God, speaking down to his or her disciples are over.

“The View” has a live audience, but rarely utilizes it. Imagine the viral possibilities if Rosie or Whoopi got into it with an audience member.

A show that’s been on-air for 18 years has no choice but to try new things to keep it feeling new and must-watch to viewers. Tapping into its audience members—who are all dying to get 15 seconds on national TV—would be a major spark to a show who’s kept its formula mostly the same.