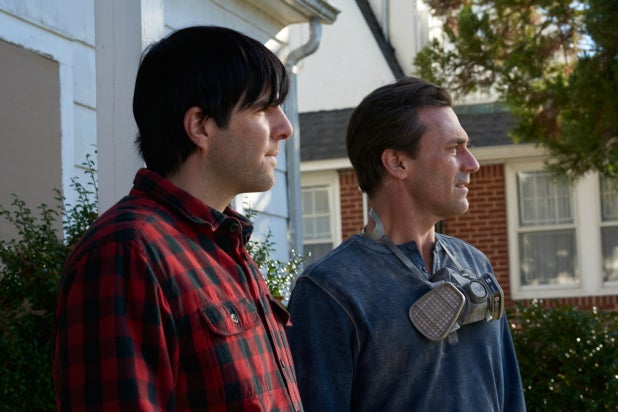 “Aardvark” opens with shots of an aardvark sniffing around in some sort of zoo-like tunnel where it is being watched by a tiny owl. These shots will recur as this strange film goes on, and it will gradually be revealed that they are supposed to be part of a traumatic childhood memory that played out very differently for two different people.

As an actor himself, first-time writer-director Brian Shoaf places a lot of responsibility on the shoulders of his three main players — Zachary Quinto, Jenny Slate and Jon Hamm — all of whom are expected to fill in many gaps in the scenario. The shy, soft-spoken and very troubled Josh (Quinto) sees a social worker named Emily (Slate) because he is having persistent hallucinations. Josh tells Emily that he was diagnosed with some kind of disease when he was 19 years old, but he keeps this diagnosis vague.

Josh’s brother Craig (Hamm) is a famous actor best known for a long-running television show called “South Street Law.” Craig is just a generic TV leading man, but in Josh’s obsessed mind, his brother is a great actor capable of playing any role. And so Josh thinks that the people he hallucinates — like an old homeless woman and a cop — are actually Craig in disguise.

At first, Emily presents herself in a very professional manner, but it doesn’t take long to realize that she is a near-total mess and very bad at her job. She meets an ex-boyfriend while on a run, and although her body language says that she doesn’t want to talk to him, when he asks her out for a “friendship” dinner, she says yes.

The ex cancels on her, and that’s when Craig himself appears by Emily’s door late at night, seemingly out of nowhere. He asks her out, again out of nowhere, and Slate really sells both Emily’s confusion and her desire. After all, it is also Jon Hamm randomly asking her out, and that is a dream for many women.

This dreamlike atmosphere continues as Emily finds herself sleeping with Craig. (Slate makes some very funny “this is so great, but this can’t be happening!” faces as Hamm’s Craig makes love to her.) Meanwhile, Josh goes on a date of his own… with a girl who may or may not be real.

“Aardvark” is the sort of movie that gets by with its unpredictable where-is-this-going vibe for about a half-hour or so. We wait to find out what is going on, and we wait to learn new information, or we wait for the information that we already have to develop into something. But it becomes apparent at a certain point that the set-up is pretty much all there is to this movie.

Quinto is most striking in roles where he gets to make a bold, harsh impression, but he is versatile and skilled enough to also hold the screen by playing the sort of recessive and inward character he plays in “Aardvark.” Quinto wears his hair here in thick uneven bangs that fall over most of his face, and this hairstyle is so odd that you begin to think that what Josh really needs first is a barber.

Watch Video: 'Marjorie Prime' Star Jon Hamm on His Fear of Being Replaced by a Hologram

Slate gives the most impressive performance here, because she’s so obviously game to play a wreck of a woman who is barely getting by, much like her character in “Obvious Child.” The fun is in seeing how her character in “Aardvark” tries so hard to hide just what a mess she is behind the clothes and proper behavior of a therapist. It’s almost as if Emily is imitating a therapist character that she saw on TV, but this element of the story goes undeveloped, even though we briefly see both Emily and Josh watching some of “South Street Law.”

“Aardvark” is frustrating because there does seem to be an unusual story about mental illness, acting and family that wants to emerge, but the script has only worked out the first third of its mission. Once that third is over with, the expected progression of the plot and these characters never happens. And this is a pity, because Shoaf is expert at catching our attention but not quite as expert at holding it.