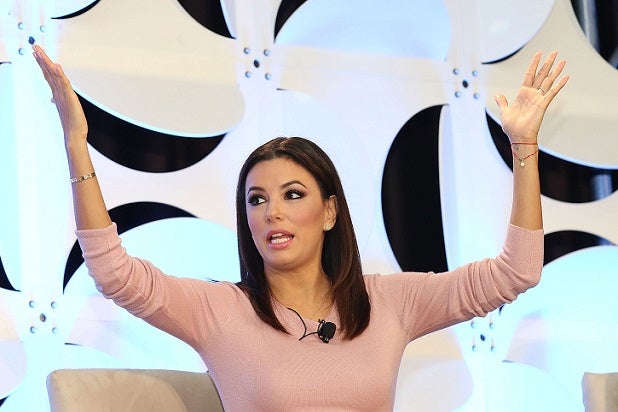 ABC Family is getting to work with Eva Longoria.

The network is developing a project, “You’ve Got to Work It,” which hails from “Desperate Housewives” alum Longoria and ITV Studios, the network said Tuesday.

The project, adapted from the U.K. show of the same name, will center on eight unemployed girls from diverse backgrounds who vie for seven job opportunities in as many different industries, eventually completing “head-to-toe and emotional makeovers.”

The network is also developing a new project from Andrea Abbate, who’s worked as a writer and producer on the  network’s “Young & Hungry.” That project, which bears the working title “Sold Out,” is about a young band that hits the road for its first-ever tour. The scripted comedy, which will be written by Abbate, is executive produced by Irving Azoff, with Todd Holland (“Malcolm in the Middle”) directing.

Also in development at ABC Family: “I Am Maker,” in which World of Wonder and Maker Studios will “share an unprecedented look at what it takes to be become a successful YouTube star today”; and “We Heart Disney,” which is executive produced by David Foster and “American Idol” vet Nigel Lythgoe, and will feature “some of today’s biggest pop stars singing classic Disney songs.”

The network’s development slate further includes projects such as the Vegas-centric drama “Hearts and Clubs,” from Christina Aguilera and “Gossip Girl” alum Austin Winsberg; and “Famous in Love,” which stars Bella Thorne and centers on an ordinary college student who gets her big break after auditioning for a Hollywood blockbuster and finds herself involved in a mystery about a missing pop star.

On Tuesday the network also said that McG (“Charlie’s Angels,” “Kevin From Work”) will direct the first episode of “Shadowhunters,” which is based on Cassandra Clare’s “The Mortal Instruments” book series.