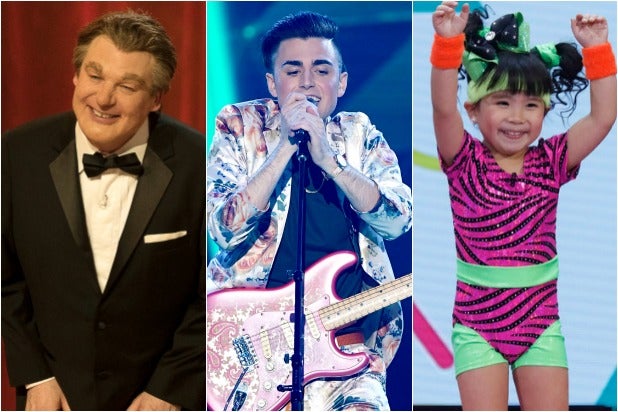 ABC’s debut of the second season of “The Gong Show” didn’t ring the Nielsen ratings bell as loudly as its primetime competition Thursday night, according to early data.

In the 8 p.m. hour, the game show’s return fell behind Fox’s “The Four: Battle for Stardom” and NBC’s “Little Big Shots” in both the key adults 18-49 range and total viewers. And all three of those were clobbered by repeats of “The Big Bang Theory” and “Young Sheldon” on CBS.

The Disney-owned broadcaster’s had two other debuts that evening that faired slightly better.

The third season start of the Alex Baldwin-hosted “Match Game” only lost to the back half of “The Four” in the key demo its 9 p.m. time slot, but still landed behind CBS in total viewers. And the series premiere of the Rachel Bilson-led “Take Two” could only manage a tie in the demo against reruns on NBC and, you guessed it, CBS at 10 p.m. However, it did pull ahead in overall eyeballs.

CBS and Fox tied for first in ratings with a 0.7 rating/3 share in the advertiser-coveted 18-49 demographic, according to preliminary numbers.

CBS was first in total viewers with an average of 4.4 million, airing just returns.

Fox was fourth in viewers with 2.4 million, filling its primetime block with “The Four: Battle for Stardom” from 8-10 p.m.

Also Read: Chris Hardwick: How Big a Ratings Draw Is the AMC and NBC Host?

Telemundo was fifth in ratings with a 0.5/2 and sixth in viewers with 1.3 million.

Univision was sixth in ratings with a 0.4/2 and fifth in viewers with 1.5 million.