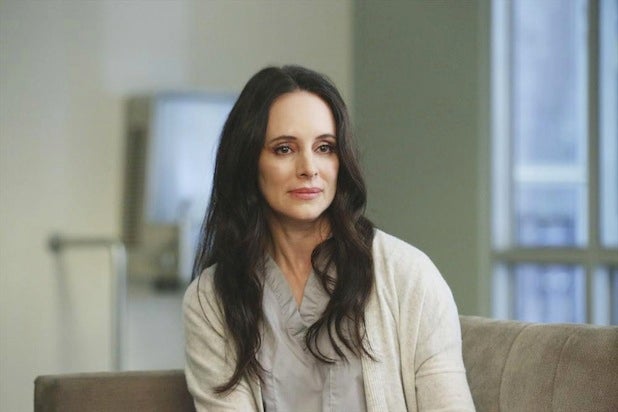 (Spoiler alert: Do not read on if you haven’t yet watched the Season 4 premiere of “Revenge” entitled “Renaissance.”)

Passing the “Revenge” baton from damaged Emily (Emily VanCamp) to vengeful Grayson matriarch Victoria (Madeleine Stowe) is going to be a slow burn on the ABC drama.

The biggest sign of the change occurred right at the top of the episode when Victoria’s voiceover replaced that of Emily’s. We would learn that all her talk of forgiveness and making peace with those she has wronged and vice versa was actually being spoken during a group meeting at the psychiatric hospital in which Emily trapped her at the end of Season 3. And it was all lies.

The only hatchet Victoria plans on burying is one in Emily’s skull, but she has to survive the hospital first.

Meanwhile, Emily seems as if she has moved on now that she’s completed her plan of vengeance on the Graysons. She has since taken over Grayson Manor and plans a housewarming. That, too, isn’t what it seems. Unknown to her bestie and co-party planner Nolan (Gabriel Mann), she has a mini revenge plot planned for the event. The death of Aidan (Barry Sloane), drugged and smothered to death with a pillow by Victoria last season, has Emily feeling a kinship with a local woman, Nancy (Alicia Lagano), whose fiance was killed in a boating accident while its skipper was plowing his mistress. Emily decided she’d reveal his secret at her party in order to get Nancy some justice.

After the deed was done, Emily was taken aback when Nancy didn’t revel in the payback. “Nothing can bring back the people we love, nothing,” Nancy told Emily, an idea that has always remained at the center of “Revenge” and yet only been understood by Emily in fleeting moments over the past three seasons. This time, though, was different.

Nolan called Emily out on being an addict who couldn’t get enough of making people pay for their sins, even when her fight is over. Reluctant to hear him at first, Emily came around later.

Also read: ‘Once Upon a Time’ Premiere Review: Fairytale Drama Is ‘Frozen’ in More Ways Than One

Speaking of addicts, Charlotte (Christa B. Allen) has become a coke fiend since sending her Conrad (Henry Czerny) to jail (inadvertently) and Jack (Nick Wechsler) to the authorities for kidnapping her. She pretty much hates everyone and has taken up with Margaux’s (Karine Vanasse) skeezy brother Daniel (Josh Bowman) — who stepped down from his post at Margaux’s company after her brother blackmailed him with pictures of a dead, overdosed hooker in his bed, and is flying through his fortune as he acts out the playboy life instead of dealing with his problems. And Jack has become a police officer after avoiding being charged for Charlotte’s kidnapping, so he can be the only cop in The Hamptons who won’t be swayed by power and money. With friends like these, good luck on that one!

Back at the psychiatric hospital, Victoria was cooking up her plot to escape. Always one to enlist the help of her “friends,” she pulls off a thrilling and stylish departure from the hospital. Her first destination is Grayson Manor.

When Emily opens the door to see Victoria, the dethroned queen tells her that things didn’t have to end up this way. She offers up the scenario that Emily could’ve arrived to The Hamptons, told the truth about who she was and reunited with her half-sister Charlotte. Instead, Emily chose revenge, which has left them both with dead lovers. Once again, the show echoes the idea behind Nancy’s statement. But let’s face it, Victoria’s suggestion wouldn’t have been very fun.

As Victoria walked away from her former home, a cloaked David Clarke (James Tupper), who was revealed to be alive on the Season 3 finale right before he stabbed Conrad to death, grabbed and drugged her. Not quite the romantic reunion Victoria would’ve wanted, but I have the feeling we’ll get some answers next week.

So, the cycle begins again. This time, though, it’s Victoria’s turn to tell her side of the story and it’s her turn to dish out the payback. Will we learn that she was the victim of forces bigger than she could resist? Will her secrets show that Emily’s anger over her father’s framing and death were misdirected? We’ll soon see.

“Revenge” started off Season 4 with a solid episode that built on the previous season’s momentum (let’s pretend Season 2 never happened, kay?). I’m excited to see what revelations we’ll learn from getting a better idea of Victoria’s point of view and what shakeups will occur now that David Clarke is alive and back in the mix.