This probably beats dressing up as a zombie for Halloween.

With the Season 8 premiere of “The Walking Dead” coming up, AMC launched a new virtual reality app — aptly titled “AMC VR” — on Thursday, giving users a chance to roam around as “walkers” in a four-part series based on the hit zombie show. And after the season premiere on Sunday, an extended 360-degree scene from “The Walking Dead’s” 100th episode will debut on the app, putting viewers alongside stars Jeffrey Dean Morgan and Seth Gilliam.

And if a zombie apocalypse isn’t your bag, AMC VR is also hooking viewers up with Hong Kong-style martial arts training from “Into the Badlands,” as well.

“With the launch of AMC VR, we are pleased to bring shows like ‘The Walking Dead’ and ‘Into the Badlands’ to life in an immersive and experiential way,” said AMC EVP Mac McKean in a statement. “Viewers want to enter the
worlds they watch on AMC, and this app brings them there.” 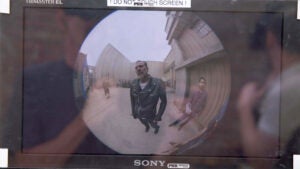 An upcoming experience based on AMC’s new show “The Terror” will be added to the app next. The AMC VR app is available on iOS and Android, as well as Gear VR and Google Daydream.