Sofia Vergara might not be as terrified by having her mind read as being made to think she shot her fellow judge, but it still freaked her out pretty good. And it earned psychic Peter Antoniou four yeses on “America’s Got Talent” this week.

Though he started his act on stage, Antoniou eventually took the judges to an external location, and explained that he laid out 1,000 empty ring boxes. Simon Cowell was then tasked with hiding Vergara’s engagement ring in one of the boxes — neither Antoniou nor Vergara watched as Cowell chose which one — and then Antoniou would have Vergara psychically guide him to the ring.

To do so, Antoniou asked Vergara to recall the memory associated with getting the ring. As the psychic began his search, he began listing what he “knew” about Vergara’s engagement.

“When you were proposed, you weren’t at home were you? You were somewhere else, you were far away,” Antoniou checked with Vergara. “And the plans had to change for your engagement.” 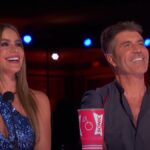 Vergara responded in the affirmative, looking shocked. Still, when the psychic selected a box, Vergara admitted that she was “like zero” percent confident that he had actually chosen the right box.

“There’s no way you know that that’s there,” she said.

And yet, Antoniou did indeed choose correctly, presenting Vergara with her “lost” ring. In doing so, he noted another detail about the moment she got engaged to husband Joe Manganiello: that a rainbow appeared right as he proposed.

Shocked, Vergara confirmed Antoniou’s knowledge, stunned that he knew about the minor detail. According to Vergara, Manganiello had planned to propose by the ocean, but got nervous and ended up proposing in their hotel room.

“I’m gonna throw up!” Vergara said with a laugh when the ring was revealed.

You can watch Antoniou’s full performance here and above. His ring trick begins at about 4:40.