Anthony Anderson will not be returning for Season 22 of NBC’s “Law and Order,” TheWrap has learned.

Anderson had only signed up to play Det. Kevin Bernard, a role he originated on the network from 2008-2010, for one season. After fulfilling his commitment, he’s set to move on.

In his character’s final appearance in the Season 21 finale, Bernard recruited the help of “SVU” character Olivia Benson (Mariska Hargitay) in the investigation of a police officer’s murder, turning the collaboration into a crossover. The events of the episode did not indicate that Bernard’s time was coming to an end.

Anderson’s relationship with NBCU continues, though. Earlier this month it was announced that Anderson and his mom, Doris Bowman, will jet off to Europe on a six-week vacation for the new reality series “Anthony Anderson and Mom: European Vacation.” The show is coming to E! 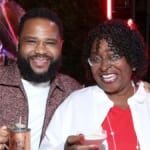 First premiering in 1990, “Law & Order” was originally canceled by the network in 2010, before being revived last year. Its spinoff, “Special Victims Unit,” is currently in its 23rd season. A separate spinoff, “Law & Order: Organized Crime,” premiered in 2021 and welcomed back former “SVU” mainstay Christopher Meloni to the franchise. NBC has picked up the series for a third season.

Anderson recently wrapped an eight-year run as star and producer of ABC’s “black-ish,” which included seven consecutive Emmy nominations for the actor.