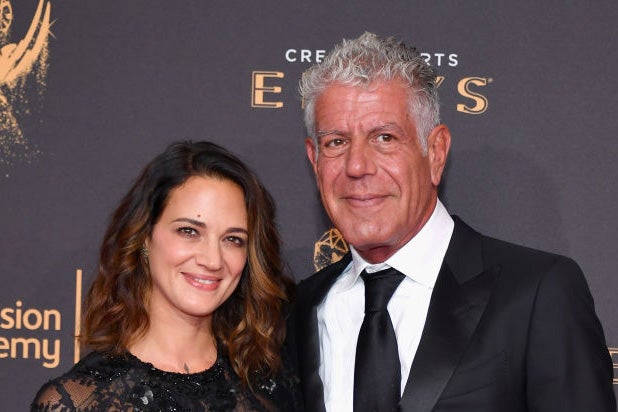 Anthony Bourdain, who died Friday, was known not only for a being a celebrity chef and host of CNN’s “Parts Unknown,” but also as one of the strongest advocates for the #MeToo movement after his girlfriend, actress-director Asia Argento, came forward last fall to accuse mogul Harvey Weinstein of sexual assault.

Bourdain’s death by suicide on Friday at age 61 has prompted an outpouring of remembrances, including from other #MeToo advocates and Weinstein accusers like Rose McGowan.

“You were so loved, the world is not better without you,” she tweeted. “Asia needed you, Anthony. We needed you. Please come back.”

Bourdain, who publicly announced his relationship with Argento last May, strongly supported the actress-turned-activist last fall after she publicly accused Harvey Weinstein of sexual misconduct.

Argento mourned Bourdain’s death, saying she was “beyond devastated” in a message on her Instagram account. “Anthony gave all of himself in everything that he did,” Argento wrote. “His brilliant, fearless spirit touched and inspired so many, and his generosity knew no bounds.”

.@AsiaArgento I am proud and honored to know you. You just did the hardest thing in the world. https://t.co/i2Lsb6h5vU

It was an honor to cook for this meeting of the minds @AsiaArgento @rosemcgowan @AnnabellSciorra pic.twitter.com/5UoOl1Xhux

Since then, Bourdain became one of the biggest male advocates and defenders of entire #MeToo movement, consistently calling out men who either criticized, made light of, or were complicit in Hollywood’s culture of sexual misconduct and harassment.

He didn’t mince words when speaking about how Quentin Tarantino kept silent despite knowing about accusation of sexual misconduct by Weinstein.

Bourdain also discussed turning down a lucrative business deal because he felt the person making the offer was “clearly a monster.”

During an interview with Slate, the chef reckoned with his own past and how he may have contributed to the “meathead” culture of the restaurant industry.

Also Read: Anthony Bourdain Defends #MeToo Accusers From Doubters: 'They Have Nothing to Gain'

Last December, shortly after the accusations against his friend and fellow chef Mario Batali surfaced, Bourdain defended all #MeToo accusers in an essay published on Medium titled “On Reacting to Bad News,” stating: “In these current circumstances, one must pick a side. I stand unhesitatingly and unwaveringly with the women.”

He continued: “We are clearly at a long overdue moment in history where everyone, good hearted or not, will HAVE to look at themselves, the part they played in the past, the things they’ve seen, ignored, accepted as normal, or simply missed – and consider what side of history they want to be on in the future.”

In the essay, Bourdain again expressed remorse for his own role in the romanticization of the restaurant industry which fostered poor behavior by men and created a toxic work environment for women.

“To the extent which my work in ‘Kitchen Confidential’ celebrated or prolonged a culture that allowed the kind of grotesque behaviors we’re hearing about all too frequently is something I think about daily, with real remorse,” he wrote.

In her tearful video message responding to Bourdain’s death, Rose McGowan also encouraged others to seek support if they are experiencing depression.

“I have a message for those considering suicide as a solution to a temporary problem,” she wrote. “Please call a hotline. Please reach out.”

Anthony I am so mad at you. You were so loved, the world is not better without you. I have a message for those considering suicide as a solution to a temporary problem. Please call a hotline. Please reach out. Asia needed you, Anthony. We needed you. Please come back. pic.twitter.com/kqOEdJ80h9