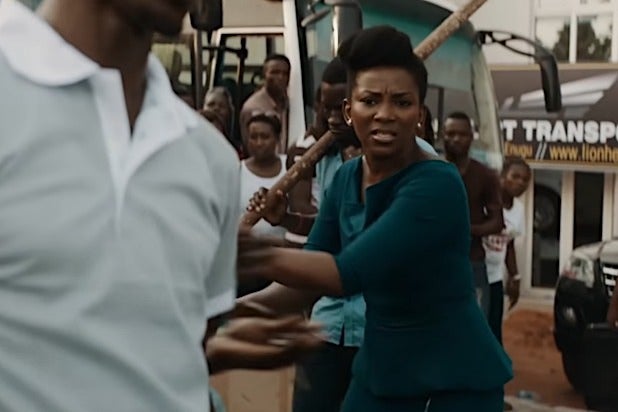 Ava DuVernay sharply criticized the Academy of Motion Pictures Arts and Sciences on Monday, after the group voted to disqualify Nigeria’s first-ever Oscar submission on the grounds that the movie’s dialogue is primarily in English.

“Lionheart,” from actress-director Genevieve Nnaji, was submitted for the Best International Feature Film category, formerly known as Best Foreign Language film. “Lionheart” is partially in the Igbo language of Nigeria, but most of the film is in English, a violation of an Academy rule that entries in the International Film category must be in “a predominantly non-English” language. The academy announced its decision Monday morning.

“To @TheAcademy, You disqualified Nigeria’s first-ever submission for Best International Feature because its in English. But English is the official language of Nigeria,” DuVernay tweeted Monday afternoon. Are you barring this country from ever competing for an Oscar in its official language?”

Soon after, Nnaji thanked Ava for her comments, saying on Twitter that “This movie represents the way we speak as Nigerians. This includes English which acts as a bridge between the 500+ languages spoken in our country; thereby making us #OneNigeria. @TheAcademy.”

“It’s no different to how French connects communities in former French colonies,” Nnaji continued. “We did not choose who colonized us. As ever, this film and many like it, is proudly Nigerian.”

In a statement provided to TheWrap, the Academy defended the decision. “In April 2019, we announced that the name of the Foreign Language Film category changed to International Feature Film. We also confirmed that the rules for the category would not change,” the group said. “The intent of the award remains the same — to recognize accomplishment in films created outside of the United States in languages other than English. As this year’s submitted films were evaluated, we discovered that Lionheart includes only 11 minutes of non-English dialogue, which makes it ineligible for this award category.”

The Best Foreign Language Oscar, established to honor non-English language films, was first awarded in 1956. The Academy changed the name in April 2019 after it was argued that the term “foreign” was “outdated within the global filmmaking community.” The new category name “better represents this category, and promotes a positive and inclusive view of filmmaking, and the art of film as a universal experience,” the Academy said. However, the language eligibility requirement was not changed.

“Lionheart” has not been barred from other feature film categories. But it would need to play in a Los Angeles County commercial theater for a minimum of seven days, with at least three screenings a day for paid admission before the end of the year in order to qualify, a considerably higher hurdle.

“Lionheart,” in which Nnaji plays a woman who tries to keep her father’s struggling company afloat in a male-dominated environment, is currently available on Netflix.