Lawyer Michael Avenatti was sentenced Thursday to 30 months behind bars for his attempt to extort Nike for over $20 million, according to multiple reports.

Gardephe called the high-profile lawyer’s conduct “outrageous” but did not sentence him to the nine years suggested by federal guidelines, citing what he saw as Avenatti’s “severe remorse.” He also sentenced him to three years of supervised release. 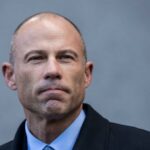 In February 2020, Avenatti was found guilty on all three charges related to his attempts to extort the sports giant.

Prior to his arrest, he gained widespread fame for representing Stormy Daniels, the adult film actress who said she had an affair with Donald Trump before he was president and was subsequently paid off.

Before he was taken into custody last March, Avenatti tweeted, “Tmrw at 11 am ET, we will be holding a press conference to disclose a major high school/college basketball scandal perpetrated by @Nike that we have uncovered. This criminal conduct reaches the highest levels of Nike and involves some of the biggest names in college basketball.”

“The allegations related to Nike arose out of Mr. Avenatti’s representation of a client identified in the complaint as the coach of an amateur men’s basketball program in California, which prosecutors said had a sponsorship agreement with Nike,” the complaint at the time read. Also around that time, Daniels said in a statement that she cut ties with Avenatti more than a month prior, “after discovering that he had dealt with me extremely dishonestly.”

According to reporters on the scene Thursday, Avenatti wept while addressing the court.