Babysitters of the world, rejoice: This summer finally has an ideal Mommy’s Night Out movie, a hard-R farce aimed at a demographic that just wants to park the kids in a safe place, knock back some Chardonnay and enjoy some deep belly laughs about the pleasures and pitfalls of motherhood.

Dads, the childless and pretty much everyone else can find “Bad Moms” funny as well — I thought “Central Intelligence” was the only summer comedy that would sneak up on us, but here’s a second welcome surprise.

Written by “Hangover” veterans Jon Lucas and Scott Moore (who also direct), “Bad Moms” starts a bit slow, with travails-of-parenthood gags that feel recycled from old “Hi & Lois” comic strips and the collected works of housewife-humorist Erma Bombeck. (The dog’s got vertigo!) The plot kicks into high gear — and into mature-audiences-only levels of bawdy brazenness rarely seen in Hollywood movies centered on women’s lives — when Amy (Mila Kunis) hits that legendary last nerve about which mothers everywhere have always warned us.

She has kicked out her husband Mike (David Walton, TV’s “About a Boy”) for his longtime Internet affair, she’s overworked and underappreciated by millennial boss Dale (Clark Duke), while her kids Jane (Oona Laurence, “Pete’s Dragon”) and Dylan (Emjay Anthony, “Chef”) are, respectively, overstressed and understimulated by a school that’s currently under the iron fist (and coiffed perfection) of PTA president Gwendolyn (Christina Applegate). When Amy walks out on one of Gwendolyn’s three-hour meetings, she decides to chuck her concerns to the winds and to embrace becoming a bad mom, tying one on with sex-crazed single mother Carla (Kathryn Hahn) and overburdened stay-at-homer Kiki (Kristen Bell). 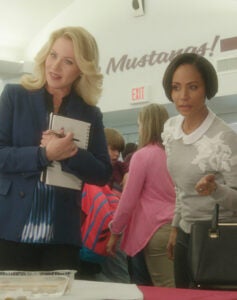 (This drunken night leads to the three of them wreaking havoc on a supermarket, in perhaps the cinema’s greatest grocery store sequence since the original “Stepford Wives.”)

“Bad Moms” soars highest when it embraces these women and their decision to slough off the shackles of society’s expectations; when they learn to just say no to demands from spouses and children and the PTA to get some hard-earned time to themselves, it’s liberating for them, without the comedy-killing earnestness that often drowns such moments. Lucas and Moore create entertaining characters that have been given additional depth by this talented ensemble (which also includes Jada Pinkett Smith and Annie Mumolo), many of whom are no doubt relishing a rare opportunity to be front and center rather than relegated to the sideline The Wife character in a more traditional male-centered narrative.

You can feel this movie’s gears getting occasionally ground down by its devotion to familiar plot structure (can Amy unseat the treacherous Gwendolyn as PTA prez?), and you’ll see many moments coming, from Amy’s tearful scene of self-doubt to the inevitable “We’re all bad moms!” speech. Thankfully, there are enough big, sustained laughs to be found throughout, whether it’s the absurdist and inappropriate non sequiturs from Hahn (this movie’s MVP), Bell’s wide-eyed naivete, Kunis’ deadpan, Applegate’s thousand-yard stare or even Duke condescendingly praising 32-year-old Amy as being part of “the greatest generation.”

As bro-tastic as the previous efforts from Lucas and Moore have been (they also gave the world “The Change-Up” and “21 & Over”), they’ve managed to nail quite a few moments that feel true, from the long-married Amy’s inability to flirt (she keeps driving away men with mom topics) to the aftermath of a wild bacchanal in which someone observes, “The best thing about a mom party is that it ends promptly at 11 p.m.”

You have to forgive a lot from “Bad Moms,” from the barely written token hunk (Jay Hernandez as the sexy widow who makes all the mommies swoon) to the fact that, in a movie that pits working mothers against helicopter moms, no one, not even Amy, really seems to have an actual job. (Plus there’s a scene, focused on a dowdy bra, that’s almost identical to one from “The Boss” — and Bell was in that one, too!) But the wonderfully unexpected cavalcade of hilarity — including one of the smartest and most unexpected celebrity cameos in recent memory — makes this summer sleeper a satisfying surprise. Book that sitter.

TheWrap looks at dysfunctional moms in honor of Mother's Day, from Norma Bates in "Psycho" to Peg Bundy in "Married With Children" and "Serial Mom."
View In Gallery