There are plenty of reasons to hate cable news– but Thursday’s coverage of "The Amazing Adventures of Balloon Boy" isn’t one of them.

Even before the balloon that wasn’t carrying little Falcon came down to earth, media pundits had taken to Twitter and some websites to bemoan coverage of the event. Some critics worried that cable news was going to show a six-year-old die on live TV; others played the ever-popular "aren’t there more important things you could be covering?" card.

It was a race to see who could tsk, tsk the loudest and the soonest. 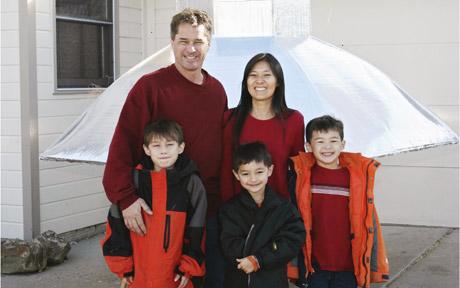 "Given the real chance that there might be a six year-old on board who could fall over 5,000 feet to the ground or even crash into a mountain, shouldn’t cable news cut away from wall-to-wall live coverage?", Mediaite’s Colby Hall demanded as the drama unfolded. And as his website began its own wall-to-wall coverage of the event.

Mediaite later bitchslapped the Internet as well, expressing its rage that anyone on Twitter would dare joke about poor Falcon before it was clear he was safe.

All of this navel-gazing by media pundits and the Twitterati misses the point: One of the main reasons cable news exists — besides providing employment to primetime blabbermouths spewing partisan political rants — is to cover events as they happen, in real time.

In a perfect world, maybe cable news would only devote resources to truly important matters of national import. Maybe our news channels would exist only to serve the public good, and a live Senate debate on health care would always trump a high-speed car chase.

But we don’t have the BBC in America. PBS can barely afford to put on an hour of news five days a week, let alone launch a 24/7 news channel.

We’ve got CNN, MSNBC and Fox News– and they exist to make money for the massive corporations that own them. That means they’ve got to balance news judgement with commercial viability.

Of course cable news was going to cover Balloon Boy live! Local authorities were convinced that a little boy was trapped in a balloon speeding to possible death. That doesn’t happen every day (unlike, say, a health care debate, which never ends).

Yes, it’s possible we might have all witnessed a young boy die on TV. But should cable news not cover space shuttle launches because there’s a chance viewers could witness the fiery deaths of brave astronauts (something that’s happened twice already)?

The fact that this whole thing was, at best, a misunderstanding and, at worse, a hoax doesn’t change the fact that, in the moment, all the information available to the news channels at the time strongly suggested a movie-like drama was playing out. Not covering it live was not an option, at least not in a world where ratings (and profits) are a reality.

I’m not suggesting the coverage of this event was perfect. The blather alert level was particularly high Thursday, with anchors struggling too hard to sound wise about events that really needed no description.

But while those of us who work in "print" have the luxury of waiting before we hit "post," cable newsies have to act in real time, on camera. Unless we replace Shep Smith and Co. with an army of news robots, there’s no avoiding stupid comments or inane questions when covering live news.

Likewise, I’m not gonna get all worked up about how folks on Twitter responded yesterday. People react to scary events in different ways, much as some folks laugh during horror movies while others soil their pants. (Unless the film is "Paranormal Activity," in which case the only legitimate reaction is, "I paid $10 for this?" But I digress).

And for those out there already preparing a way to link yesterday’s events to the world of reality TV, can I please beg you: Don’t. Just because Balloon Boy’s family might be media whores doesn’t somehow make the producers of "Wife Swap" culpable. This family was a little messed up long before TV cameras ever showed up.

Bottom line: We live in a world of real-time everything, including media analysis. News outlets, including TheWrap, are under intense pressure to have an angle, to push a point of view almost the minute something important happens.

That’s fine. But in the case of Balloon Boy, the impulse to denounce cable news for simply doing its job just doesn’t make sense.