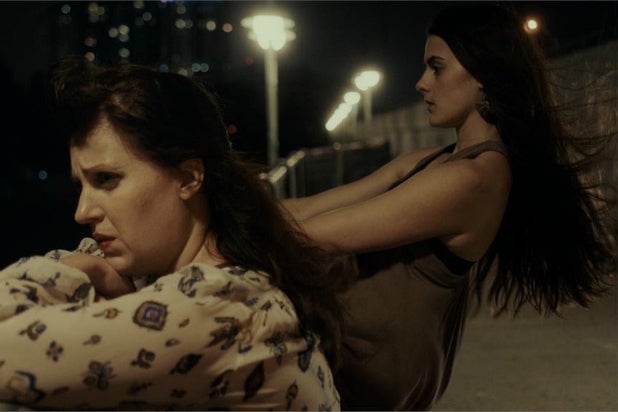 Sibling bonds have sinister consequences in “Barracuda,” Jason Cortlund and Julia Halperin’s Austin-set drama about two sisters connecting for the first time in the wake of their famous father’s death. With their sophomore feature, Cortlund and Halperin (“Now, Forager”) demonstrate a gift for not only creating beautiful images in unexpected moments, but also avoiding narrative shortcuts or tonal clichés to tell a story that covers familiar territory while ultimately defying easy categorization.

Newcomer Sophie Reid (“Beauty and the Beast”) plays Sinaloa, a vagabond singer-songwriter who turns up on the doorstep of Merle’s (Alison Tolman, TV’s “Fargo”) Austin fixer-upper claiming to be a half-sister by their father, a philandering, alcoholic musician who passed away years ago. Merle is skeptical about the confrontational young woman, but her fiancé Raul (Luis Bordonada, “Transpecos”) invites Sinaloa to stay with them — and later, to attend their engagement party. That’s where Sinaloa meets an opportunistic cousin named Trace (Tanner Beard), who’s eager to help fleece Merle of her inheritance, and Merle’s mother Patricia (JoBeth Williams), who immediately and openly disapproves of her late husband’s illegitimate daughter.

Despite their contrasting personalities, the two women slowly develop a bond with one another, but their time spent together inadvertently exacerbates Merle’s frustrations with her job and challenges the stability of her relationships with Raul and Patricia. As she tries to support this sister she never knew, Merle quickly discovers that Sinaloa harbors much more anger about their father than possibly she even realizes, and she is eventually forced to choose between the life that she has built for herself and this new and disruptive presence that is determined to stake a claim on their family legacy — no matter the cost.

Estranged siblings and sordid family histories have long provided filmmakers with fertile dramatic foundations upon which to build, often to uninspired, exhaustive ends. Cortlund and Halperin breathe new life into a well-worn premise by creating two women whose points of view, and the complex feelings beneath them, are equally valid, and then letting their conflict unfold without resorting to manipulative payoffs or simplistic resolutions.

Both Merle and Sinaloa are, indisputably, identifiable character types: one cautious, the other impulsive; Merle is diplomatic, while Sinaloa is reckless, and so on. But the way in which Merle’s conventional life unravels follows an unpredictable path, while Sinaloa’s simmering resentment emerges less as an impulse to destroy Merle’s world than to build one that she never had. Both sisters, meanwhile, discover things in each other (and themselves) they hadn’t expected.

Cortlund and Halperin use some of the language of the psychological thriller to explore Merle and Sinaloa’s relationship, but at its heart, “Barracuda” is a drama about the pain and desperation of feeling left out, and the way different people come to terms with their own feelings about something they feel like they deserve, or are owed, but has permanently left them with an emptiness that may never be filled.

As Sinaloa, Reid amplifies that theme with a flashy but remarkable performance that creates a wonderful sort of unease that always feels perfectly believable, the byproduct of an upbringing spent following in her father’s artistic footsteps as a way of trying to figure out why she was never “good enough” for his love. Tolman, meanwhile, tackles the arguably tougher job of showing an outwardly healthy person’s slow emotional deterioration, and manages to make Merle’s unraveling a beautifully unexpected, incomprehensible experience that leaves her as mystified as those around her.

Jonathan Nastasi’s cinematography beautifully captures both Austin’s quirky landscape and the interior worlds of the two women, as a bustling, cacophonous kid’s museum exhausts the hard-working Merle, and a red-bathed, mostly empty bar provides a venue for Sinaloa to confess in song the feelings she can’t articulate elsewhere. From stray teardrops staining the wood of an old guitar to the colorful glass that keeps Merle imprisoned in her office, Cortlund and Halperin skillfully utilize oblique visual metaphors rather than direct references in dialogue and action to underscore the emotional meaning of the choices these sisters have both made and unwittingly inherited.

But ultimately, it’s the tragic, unexamined complexity of the feelings that Sinaloa brings to Merle, and the sophistication of Reid and Tolman’s performances as opposite sides of the same coin, that elevates “Barracuda” above the ranks of the countless family dramas and psychological thrillers to which it might otherwise be compared. It’s a film that showcases Cortlund and Halperin’s skill as storytellers, by resonating with audiences while challenging their expectations.