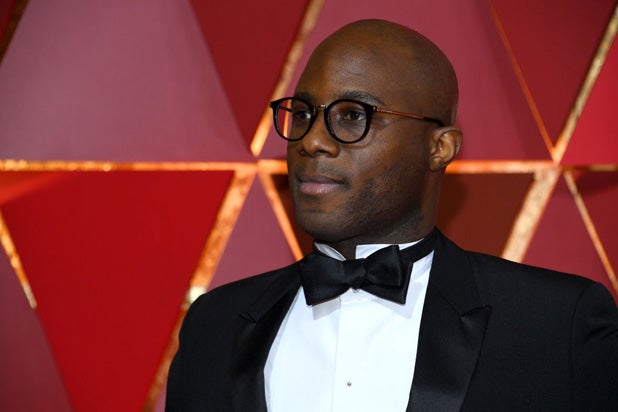 Barry Jenkins is in talks to direct an adaptation of James Baldwin’s “If Beale Street Could Talk” for Megan Ellison’s Annapurna Pictures, the company announced Monday.

The film is based on a 1974 Baldwin novel about a young Harlem woman who is in a race against time to prove her lover’s innocence while pregnant with their first child.

Jenkins wrote the screenplay in the summer of 2013, the same time he came up with what became “Moonlight,” which took home the Best Picture trophy at this year’s Academy Awards.

Jenkins and Tarell Alvin McCraney also won the Oscar for Best Adapted Screenplay. The director, who has wanted to adapt “If Beale Street Could Talk” for many years, worked to gain the trust of the Baldwin estate for film rights to the book.

“We are delighted to entrust Barry Jenkins with this adaptation,” Baldwin’s sister, Gloria Karefa-Smart, said in a statement. “Barry is a sublimely conscious and gifted filmmaker, whose ‘Medicine for Melancholy’ impressed us so greatly that we had to work with him.”

“James Baldwin is a man of and ahead of his time; his interrogations of the American consciousness have remained relevant to this day,” Jenkins said in the statement. “To translate the power of Tish and Fonny’s love to the screen in Baldwin’s image is a dream I’ve long held dear. Working alongside the Baldwin Estate, I’m excited to finally make that dream come true.”

“If Beale Street Could Talk” is Jenkins’ first production with Annapurna, which is releasing its first film as a full-fledged distributor, “Detroit,” August 4.

It is also a re-teaming of the producing team behind “Moonlight” with PASTEL and Plan B. PASTEL is a production company helmed by Barry Jenkins, Adele Romanski, Sara Murphy and Mark Ceryak whose mission is to push artists to make provocative films.

Plan B is headed by Brad Pitt and co-presidents Dede Gardner and Jeremy Kleiner, and has backed films including “Moonlight,” “The Big Short,” and “Selma.”

Jenkins is represented by CAA and Silent R Management, while Plan B is repped by CAA and Brillstein Entertainment Partners.