Critics covering early screenings of “Batman v Superman: Dawn of Justice” have been subjected to demands for secrecy rarely seen since visitors to the set of Billy Wilder‘s “Witness for the Prosecution” had to sign pledges to keep their mouths shut.

The invitation e-mail asked that no plot secrets or surprises be revealed, and statements to that effect had to be signed at the screening itself, which opened with two announcements, one from director Zack Snyder himself (in a filmed introduction). I mention all of this because, seriously, does anyone go into a movie called “Batman v Superman” expecting any genuine surprises? And if the film does ever stray from the trite-and-true path of a superhero adventure, does anyone in the audience think that take-backs won’t follow in the inevitable sequel?

See Chart: Batman v Superman: One Hero Crushes the Other at the Box Office

Genuine surprise is the rock-bottom agenda item for this latest offering from the TimeWarner-DC Comics juggernaut, since it’s been designed to launch the company’s own set of superhero team-up and solo adventures, following the trail blazed so successfully by the distinguished competition over at Disney/Marvel. Subsequently, we get a little Batman origin story — Martha Wayne’s pearls down on Gotham City’s Crime Alley just as sure as Rapunzel’s hair tumbles from her tower — and a little empire-building as well. (The movie all but hits the pause button for about five minutes to lay the groundwork for sequels to come.)

And what of the title’s promised skirmish? That face-off between two comics legends becomes but one in a series of big things bashing into other big things, which is what Snyder and writers Chris Terrio and David S. Goyer mistake for storytelling. The trio do manage to cough up an acceptable number of ooh-that’s-cool moments, and fans who will be satisfied with those will be satisfied with those, but any other ideas and characters the movie might offer get lost in the rubble.

The best notions in “Batman v Superman” come from elsewhere in the comics universe — Alan Moore’s “Watchmen” (which Snyder unsuccessfully attempted to adapt in 2009) offered the concept that our world with superheroes in it would very quickly cease to be recognizable as our world, and Frank Miller‘s “The Dark Knight Returns” gave us an older, more bitter Batman who would fight the Last Son of Krypton using high-tech armor laced with more than a touch of Kryptonite. 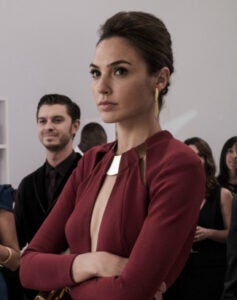 This may be the first time that an on-screen Superman (Henry Cavill, resuming his duties from Snyder’s “Man of Steel”) has been asked to testify before Congress, but much of the film revolves around the public’s mixed response to this alien savior, who does great deeds but also leaves disaster in his wake. “BvS” opens with the previous film’s climax, as we see Bruce Wayne (Ben Affleck) speed through the streets of Metropolis as the Wayne Financial building collapses, part of the massive collateral damage from Superman’s battle with General Zod (Michael Shannon).

Bruce/Batman tries to figure out a way to keep Superman in check, but so does gazillionaire Lex Luthor (Jesse Eisenberg, in manic Mark Zuckerberg mode), and they’ve both got their eye on a chunk of Kryptonite found in the wreckage of Zod’s spaceship in the Indian Ocean. Luthor, of course, has more nefarious plans afoot, but he’s being spied upon by both Bruce and the mysterious Ms. Prince (Gal Gadot), who’s definitely more than she seems.

Thank goodness Ms. Prince turns out to be Wonder Woman, who injects some real vitality into the sludgy superhero sameness. It’s also worth nothing that she’s the one female character, with the possible exception of Soledad O’Brien playing herself, who isn’t used in the film as a pawn or hostage, which is about all we get from Amy Adams‘ Lois Lane (who’s apparently as addicted to stilettos as Bryce Dallas Howard in “Jurassic World”), Diane Lane‘s Martha Kent or Holly Hunter‘s all-too-brief turn as a Kentucky senator who squares off against Luthor.

You can feel “Batman v Superman” occasionally reaching out toward more than what its corporate interests have dictated — there are a few minutes of Affleck and Gadot verbally one-upping each other at a swanky society party, promising a sexy caper movie that never emerges, and Luthor occasionally stops being a cartoon when Eisenberg commits to some speeches about the nature of man and his gods, and how a being can be all-good or all-powerful, but never both.

Such moments are fleeting, however, and are mere filigree on Snyder’s real agenda of blowing stuff up. As in “Man of Steel,” great swaths of real estate get obliterated by our protagonists, but it would appear that he heard the criticism that the previous film glibly traded on the horrors of 9/11 by showing ash-covered survivors crawling out of the ruins of Metropolis. This time, there’s always a supporting character (or Anderson Cooper) to tell us that the big bad battle is taking place in an area with no innocent bystanders.

There’s an effort to contrast Cavill’s relatively wide-eyed Kal-El with Affleck’s more cynical Bruce Wayne, a 20-year veteran of the war on the streets, but the movie relies more on our collective knowledge of these characters (and on two actors doing their best to squeeze some juice out of this script) than on dialogue and characterization. Jeremy Irons seems to be in a movie of his own as Alfred, but his asides and eye-rolls over his boss’ behavior land in a way that the heroes’ big moments never do.

The whole enterprise comes wrapped up in the usual trappings, including a bombastic score by Hans Zimmer and Junkie XL that could use a lot more Drang and a lot less Sturm. An army of effects wizards make the impossible plausible, but during one of the several climactic engagements, Snyder allows the battle to descend to Michael Bay levels of visual cacophony, where one can’t be entirely sure who is doing what to whom, and how, and where all those beams of light are coming from.

The DC Comics Cinematic Universe train has now officially left the station, but let’s hope that someone besides Snyder gets to steer, lest the whole thing jump the track and plow through the middle of the depot.