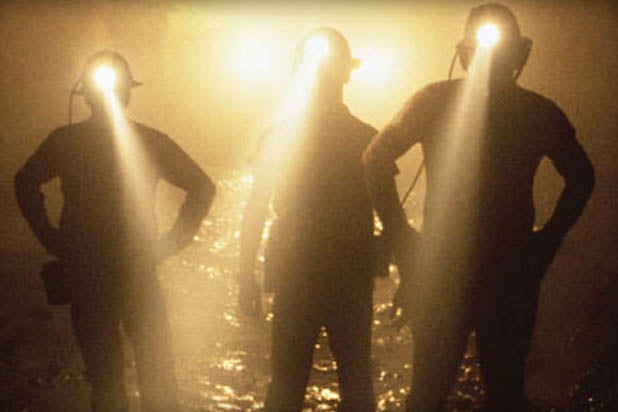 Director Ben Ketai has two reasons to celebrate on Friday. Not only is it his birthday, but IFC Midnight has theatrically released his $2 million horror movie “Beneath,” which follows a group of coal miners who find themselves fighting for their lives underground.

Repped by APA and Circle of Confusion, Ketai co-created Crackle’s hit series “Chosen” with Ryan Lewis, and recently signed a first-look with the online broadcaster.

Ketai spoke with TheWrap’s Jeff Sneider in advance of theatrical release of the film, sharing stories of his start, how he assembled his cast, the inherent challenges of shooting on a budget and what he thinks of the increasingly popular VOD distribution strategy.

TheWrap: How did you get your start as a director?
Ben Ketai: I went to the University of Michigan and did the film program there. I was really lucky when I moved out here [to Los Angeles] after college. I landed the perfect internship working for Sam Raimi, who stashed me at his company’s horror arm Ghost House Pictures. He said, ‘you’re going to learn how to make horror movies,’ and I said ‘yes’ because it’s Sam Raimi. I went on to do some low-risk short digital projects and one-offs. He was pleased with what I was doing and kept dangling that carrot [of directing a feature film].  And then one day I spread my wings and left the office, and for the last five years I’ve been freelance writing and directing. But I owe my career to Sam and Rob Tapert.

How did you land the job of directing “Beneath?”
“Beneath” came about because I had done my first feature (“30 Days of Night: Dark Days”) with Stage 6 and Screen Gems, whose Nick Phillips started his own company, Revolver Picture Company, with Kelly Wagner. They thought of me when they needed a director. I responded strongly to the script and they responded to my take, and it was pretty swift and very straightforward. It doesn’t usually go that way.

I’m not going to spoil anything, but can what happens in this movie actually happen?
It can. We did a lot of research to be able to inform the actors and have those conversations. What happens when you’re trapped in a coal mine 600 feet underground? Oxygen deprivation. Methane and CO2 can leak in and affect your psyche, change your mood and make you start seeing things. All of these things could happen, aside from supernatural elements, but the fun is in what’s real and what’s not.

It reminded me of “Event Horizon” in that sense, and then of course, there’s “The Descent.”
Well “The Shining” is my touchstone for all horror films. It’s easily my favorite genre film. I like the psychological stuff and I remember watching “Event Horizon” religiously when I was [younger]. The troubling thing is, you love these movies and you’re inspired by them but when you’re making one, how do you do it differently and not rip those off? We knew we’d run into comparisons with “The Descent” and actively went out of our way to try and make this movie feel different, which is tough, because that movie does so many things right.

One of the things your movie gets right is the casting. Tell me about putting the ensemble together.
I was really lucky. Usually, there’s a studio or international sales company or someone casting the movie just to have international value — especially a genre film. The “Beneath” producers just wanted to put together the best cast possible. We read people, we did call backs and mix-and-matches. We always had Jeff Fahey in mind and targeted him from the start. We put together lists and he was on all of our lists. We had a three-hour lunch at The Palm and I remember coming back to the office and saying, ‘Yeah, this is George Marsh.’

What’s the biggest challenge as a director when you’re making a genre movie on a budget like this?
The biggest challenge for this film was the coal mine. It’s almost logistically impossible to shoot safely and efficiently in a real mine. I think it’s actually illegal. So we had to build it ,and it took a lot of the budget, but we wanted it to look authentic. Michael Barton was our production designer and he pulled resources together and put together an incredible set. His crew had to work a lot of long hours to pull it off. But in general, making a horror film at this budget is difficult. To make someone jump out of their seat and create a scare, there’s a lot of camera language that has to be introduced to misdirect the audience one way and then startle them. You need the luxury of time to shoot those scenes, so it was tricky to figure out how to protect them and give them proper time and energy.

I could feel the budgetary constraints at times, like when you cut to darkness and rely just on sound, but I was also impressed with the film’s use of silence.
It’s funny, most of the stuff where we cut to black was in the script. When it was first announced, it was as a found footage movie, which it originally was. One of the things we did use from that draft was the use of darkness, when you’re just hearing things. The complete absence of an image on a big screen is very uncomfortable — watching the audience squirm when they’re not even looking at anything, but just because somebody turned out the lights. For the most part, it was all planned.

IFC Midnight is releasing this movie. When did they get involved?
“Beneath” was fully funded by Revolver and Elevative, so the movie was made with indie money. We took it to Screamfest because we thought it would be the best way to start drawing buzz among the genre crowd. We finished it right before the fest and it went on to win six awards including Best Picture. IFC came knocking and said they had a plan to get it out there. It got good reviews so they’re relying on word-of-mouth and people are talking about it despite a shoestring marketing budget. It’s been on VOD for a couple weeks now and it starts its theatrical run this Friday. I think it starts in New York this weekend and hits Los Angeles on Aug. 1.

Where do you stand on VOD vs. theatrical? Does the VOD strategy help or hurt a low-budget genre movie like “Beneath?”
I’m one of those ones who is not at all a purist when it comes to the home video experience. If you tell a compelling enough story, you should be able to enjoy it anywhere. This movie is a much better theatrical experience than home video experience because of the sensory deprivation and the sound design and the use of light and dark, so I definitely encourage you to see it in theaters, but VOD offers filmmakers like myself the opportunity to get their work out to the masses more efficiently. Plus, as a genre fan, it allows me to see more movies. I don’t get to go to the movies as much anymore.

Finally, I noticed that Ben Rosenblatt and Mike Silver received special thanks in the credits? Who are those guys and what role did they play in the making of this film?
We did post over at Kelvin Optical, which is Bad Robot’s state-of-the-art, in-house facility that also works on outside movies. The sound design of “Beneath” is phenomenal and technically, it looks and sounds way better than a $2 million movie should, and they helped with that.

Watch the “Beneath” trailer below: