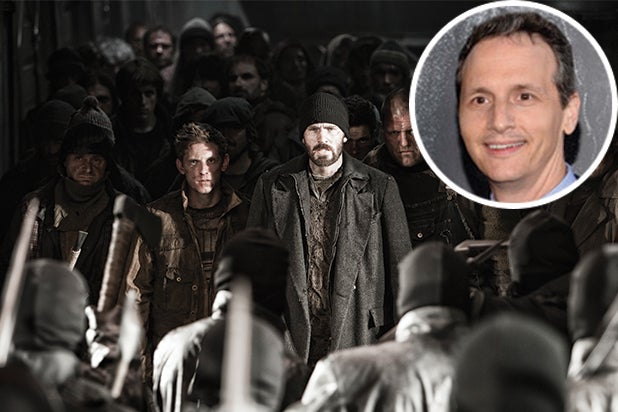 Tom Quinn has seen the future, and he wants you to see it, too — on whichever screen you prefer.

The co-president of Radius-TWC is at the forefront of the digital shake-up at the box office, spearheading a company that splits its releases on the big screen and video on demand. Radius has slowly worked to place better and more prominent titles on streaming and download services while closing the window of theatrical exclusivity, a strategy he and co-president Jason Janego learned at micro-distributor Magnolia Pictures.

Radius’ newest and biggest gambit is Bong Joon-Ho‘s “Snowpiercer,” which went to VOD just two weeks after opening in theaters.

The bet Quinn made was that the dystopia-on-a-train film had such good buzz that it would benefit most from being available nationwide after just a few weeks, instead of trying to hold on to that steam as it slowly expanded to theaters beyond the 10 major markets. It topped off at 356 theaters, and has taken in $3.45 million at the domestic box office, plus more than $2 million on VOD, since its June 27 debut.

“There can’t be just two ways to release a movie,” Quinn told TheWrap. “Somewhere in between, there is this huge, incredible minefield and cemetery of failed films that fall in between there, somewhere between the 600 print and 2,500 prints and above.

“The movies I want to work on are the movies that benefit from having more eyeballs and creating more conversations. So how do we do that without having to greenlight $15+ million in P&A (prints and advertising) every time we want to do this?”

The latest numbers have “Snowpiercer” earning about $2 million via VOD. What does that equate to, in terms of your share of the profit?
The rough equation is that every dollar is worth double because of the net return. No disrespect to theaters, it’s expensive to show a movie, I understand that, but you can’t discount that as a distributor. You also can’t discount how we’re able to push our marketing dollars a lot farther in that kind of a model than in a traditional model.

So what kind of P&A costs go into a hybrid release, with a smaller theatrical and VOD?
I think your bottom line costs is somewhat misleading because it doesn’t represent the assets that you’re delivering. We are delivering a TV campaign for this movie, there is a TV campaign for his movie, but it’s embedded in the consumption of TV. The minimum TV campaign you’d sign off on is three to five million — spend any less and it’s a moot endeavor, and most movies spend more.

I think what is a key ingredient to what makes this a successful platform, that you are immediately stacked next to every major Hollywood film that has gone out and succeeded this year, for consumption on very active menus and platforms. Because of the early window opportunity, you are shelved and profiled right alongside $100 million-grossing films.

Along with that, we are spending equally aggressively in online advertising and print advertising, all those things are very aggressive, certainly from my perspective of what an under 600 print release is. Aggressive in theater promotion, in theater standees, all of that stuff is I would say very much in line with what would be a top indie film of the year.

Have you been able to get more theaters to join up and buy in to it?
Let’s take a look at “Spring Breakers”: the majority of that film’s gross was in the top 200 theaters, not the 1,000 they expanded to the second week. Imagine if you had taken that film in its third week and you launched VOD instead of pushing it to 1.000 theaters… It’s a great success, absolutely, I love that film, but I also think that there was a better model even for these anomaly successes like that. And what we’re doing for “Snowpiercer”  is a model that I would have absolutely done on “Spring Breakers.” And I’m not comparing apples to apples here, these two films are very different, but where they fall for me in the range of where the industry is, in the marketplace, I do think they’re in this middle ground of let’s try to crack a better model.

A24 has an exclusive deal with Amazon for streaming its films; would you ever consider anything like that?
There are some distributors like A24 that go out and do exclusive VOD deals, which they do on their multiplatform films, and that would be like me doing an exclusive deal all the time with one theater chain. That doesn’t logically make sense to me, I don’t think it’s particularly productive for growing a platform. I disagree with that and we avoid exclusivity.

How do you feel about all the streaming platforms coming out with their own shows and movies now? Is that competition?
I think it’s amazing, I love that. I’m a binge viewer in the worst way. I can’t find enough hours in the day to consume longform content. But on the same token, I want to be sitting right alongside as those longform compositions so I can compete effectively and chase eyeballs. I have no issue with that. Anything that’s working in the marketplace just makes everyone better.

I also love the fact that a lot of that longform content that you’re seeing is the seeds of incredible filmmakers and actors that had long careers in film. It’s a really fantastic, beautiful crossover, and don’t be surprised if you see Radius finding its own longform piece of content to come out in the marketplace. And the way that we’d do it is possibly something different.

Is that something you’re actively talking about doing?
Very active. Wouldn’t it be great to see some of this longform content theatrically with people who love these shows as much as you do? Let’s flip the model again, right? But yeah, it’s definitely being discussed and I’m hoping we have something this year to announce. It’s not our core business, but there are definitely opportunities based on the filmmakers we work with.

Do you think people will eventually watch most movies on VOD?
To event-ize these movies, even if it’s a satellite Q&A, or actual talent attending, seeing a movie with strangers, those are things that we will not successfully replicate, no matter how technically proficient we get, that’s not gonna change. I firmly believe in the theatrical experience of movie, I believe in the power of strangers together, the only other place that happens is in the church, so that should tell you something. But at the same time, we need to find a way to crack a business that makes sense.

Just from a personal perspective, if the only place I could see “Snowpiercer” was on an iPhone, I’d be so annoyed if that was it. But on the same token, I know that I would still enjoy the film on an airplane, which I have done with many movies. I’m not downloading them on a computer or an iPad, I’m downloading them on my iPhone, and I’ll always download two movies because I don’t know what’s going to be available, believe it or not i watched “Taxi Driver” on the way back from L.A. and it was amazing.

On the flip side, my TV at home is a lot more overpowering and a hell of a lot more intimidating in my living room than some of the screens that I frequent here in New York. That’s not a disservice to those theaters, but we’ve come a long way.