Hollywood actors, writers and executives gathered at a memorial on Sunday in Santa Monica to remember power attorney Bert Fields with a string of stories about his legal prowess and sometimes unorthodox way of helping clients.

The larger-than-life litigator — with clients that included The Beatles, Warren Beatty, Tom Cruise, Edward G. Robinson and Michael Jackson — knew a lot of the secrets behind Hollywood scandals that happened throughout his six-decade-long career. Not to mention, he was yanked into a federal wiretapping and conspiracy probe into notorious private investigator Anthony Pellicano in the early 2000s.

The video that played to kick off the tribute addressed the controversies head-on — putting up a fake tabloid cover with the word “escandalo.” It also included a 1967 clip of his appearance on “Dragnet” (Jack Webb was a client) and a tribute from Tom Cruise.

“He’s a very unique adventure, someone I knew we could always count on. That was Bert,” Cruise said. “Bert, I am happy you lived and that I got to know you. I love you and I always will.”

It was clear among the friends, family and former clients gathered for his memorial service at the Broad Stage that he relished being a Perry Mason-like figure to the stars. The Hollywood royalty in attendance included Norman Lear, Dustin Hoffman, Michael Ovitz, Jeffrey Katzenberg, Jerry Bruckheimer, Frank Marshall and Kathleen Kennedy.

A very emotional Hoffman, a lifelong friend of Fields, called him “a rascal.” The lawyer represented the actor for most of his professional career — and even introduced Fields to Cruise at a dinner event where the “Mission: Impossible” star hired him on the spot.

“My wife told me I should put my phone on silent before I came up here, and I said ‘But, what if it’s Bert?’” Hoffman said. “What I respected most was his loyalty. He was the most loyal friend, a true friend.” 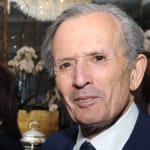 Hollywood moguls Katzenberg and Ovitz reminisced about Fields in their tributes.

“After I was fired from Disney, I needed a superhero,” said Katzenberg, who got a nine-figure settlement out of the entertainment giant after he was pushed out in a power struggle with then-CEO Michael Eisner. “He was one of the noblest of the gladiators. A friend, a consigliere and a coach for life … Bert kicked some serious ass.”

It was Mario Puzo, the “Godfather” author and client, who first called Fields a man “who may be the greatest Consigliere of them all” in a nod to the Italian word for adviser that plays a pivotal role in gangster films.

Ovitz — the Hollywood super agent who single handedly reshaped the industry through power deals as the co-founder of Creative Artists Agency and later a top Disney executive — talked about “the deals we made and the time we spent.”

And legendary writer Elaine May told via video an extended tale of her fight with Paramount over a gangster film she directed (probably “Mikey and Nicky” in 1975) where the film “disappeared” after Fields suggested she leave the editing room door open overnight in order to confound the studio’s attempt to take the film back.

L.A.’s legal power players in attendance must have appreciated that line, including some of his law firm’s top names there that included Bonnie Eskenazi. Also in the audience was longtime industry executive Warren Lieberfarb, who helped pioneer the introduction of movies put on DVDs.

The Harvard-educated lawyer with his firm Greenberg Glusker Fields Claman & Machtinger died Aug. 7 at his home in Malibu with his wife Barbara Guggenheim at his side. Fields succumbed to the long-term effects of COVID, which he contracted in March 2020. He had Bell’s Palsy as an aftereffect of the virus, which led to gradual paralysis of his body, starting from his larynx downward.

Among the many industry-shaping deals Fields helped negotiate and landmark cases across entertainment, sports and communications, Fields represented George Lucas in contract negotiations with The Walt Disney Company regarding theme parks; he represented mogul Jeffrey Katzenberg in action against Disney when the film executive left the company after rebuilding its animation business; and he also obtained a multimillion-dollar judgment for George Harrison against his former business manager.

Guggenheim was the last speaker at her husband’s celebration of life, which lasted more than three hours and was attended by some 700 luminaries of entertainment, Los Angeles legal circles, and publishing. She gave a very heartfelt speech about Fields’ life, his loves, his family and passion for music, art and literature.

“He was a Renaissance man,” she said of Fields, who in addition to cobbling high-powered deals together somehow found the time to write fiction and non-fiction books. “He listened, he didn’t talk much.”

But when Fields did hold court to talk about his life, “he knew how to tell a story because he peppered them with a lot of fiction.” The audience laughed in acknowledgment about one last Bertram Fields story.

Brian Welk and Sharon Waxman contributed to this story. 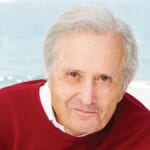