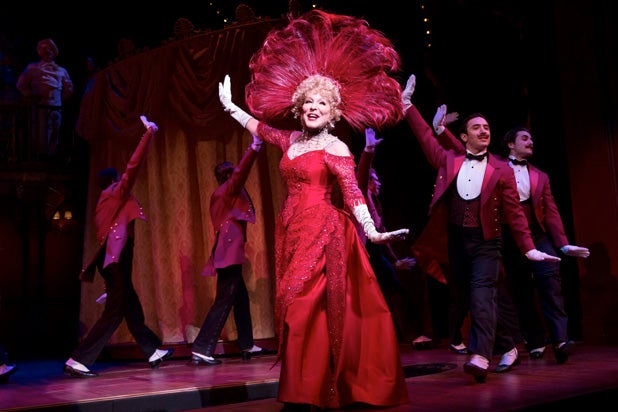 Bette Midler may be looking swell in Broadway’s hit revival of “Hello, Dolly!” but it appears that she may not be singing swell on the Tony Awards telecast on June 11.

Midler, a front-runner to earn her first competitive Tony as best actress in a musical, is not currently scheduled to sing on the show due to a high-stakes standoff between the awards show’s producers and the revival’s lead producer, Scott Rudin, according to individuals familiar with the situation.

The CBS telecast will include a number from “Hello, Dolly!” — which has earned nine Tony nominations — and Midler is still expected to attend and possibly present an award. “‘Hello, Dolly!’ will perform on the ’71st Annual Tony Awards’ telecast,” a spokesman for the show and Rudin said in a statement. “At the request of Tony Award Productions, we are not able to discuss anything further about the performance.”

A spokesman for the Tonys added: “We don’t discuss specifics about the musical performances in advance of the telecast. The show is still in the planning stage and subject to change.”

According to individuals familiar with the impasse, the “Hello, Dolly!” team hoped to perform Jerry Herman’s title song from the 1964 musical — but remotely from the Schubert Theatre, where the show has been breaking box office records since opening this spring.

The Tony producers insisted that all musical numbers be performed on stage at Radio City Music Hall — for which individual producers foot the bill to re-create sets in exchange for the exposure (and ticket sales) that can be generated from a national telecast.

It’s unclear why Midler couldn’t perform a less elaborately staged number from the show on the telecast — the ballad “Before the Parade Passes By” would fit the bill nicely.

But the New York Times reported that the show currently plans to have co-star and fellow nominee David Hyde Pierce sing “Penny in My Pocket,” a number cut from the original production but added to the new revival.

Midler, who earned a special Tony in 1974 for her eponymous concert, was famously snubbed by Tony nominators for her last Broadway appearance, starring in 2013’s one-woman bio-drama “I’ll Eat You Last: A Chat With Sue Mengers.”