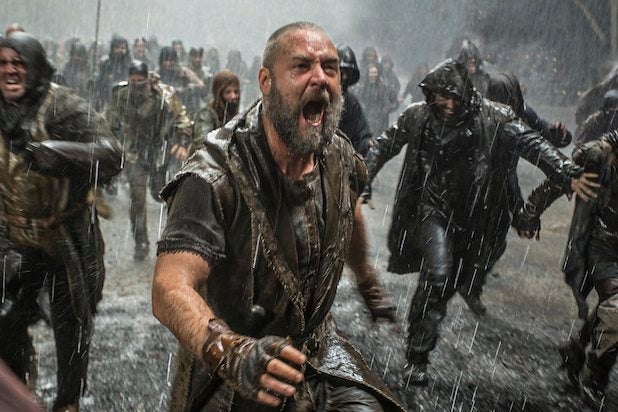 Will “Noah” float with the faithful? That’s the $130 million question for Paramount and New Regency.

TheWrap obtained a draft of the script by Darren Aronofsky and provided it to Dr. Daniel L. Smith-Christopher, professor of Old Testament studies at at Loyola Marymount University in Los Angeles, who read it and shared his thoughts (below). His conclusion? The story is almost an “anti-human, pro-environmental polemic,” though it hardly violates what he understands to be a biblical moral story — and not necessarily a historical narrative to begin with.

Christopher critiques the script for making Noah into a man of violence and an “Earth-First activist.” Instead of approaching the Biblical story with compassion toward humanity, he says, the script makes Noah, played by Russell Crowe, into a violent man himself.

The notion that God was angry over mankind’s violence “is powerful political theology, and any telling of the Noah story that overlooks this is, I believe, deficient,” he wrote. As for veracity, he’ll leave that to others: “Although I do believe that the Bible contains ideas that are inspired by people’s understanding of God … I also believe that this story is not historical, and it is questionable whether it was ever understood to be so.”

(It should be noted that this version of the script, by director Aronofsky and Ari Handel, may not be the final draft — and that Christopher has not seen the film.)

Here are Christopher’s (pictured left) thoughts on a number of scenes:

We open with imagery from the Book of Genesis, including man’s descent into chaos and warfare. A passage appears: “The Creator saw that the wickedness of man was great on the earth, and it grieved His heart.”

Christopher: “Wickedness” omits the “violence” as a specific reason for God’s disappointment. The script generally emphasizes the “angry vengeance” of the Creator, rather than the deep regret and disappointment! That is a rather different view — but the writers give in to stereotypes about the “angry God.”

Noah engages in brutal hand-to-hand combat to stop a gang of poachers attacking a bison herd. Described as a “master of military arts” and armed with mysterious exploding “packets,” Noah “carves through a half-dozen men without breaking a sweat.”
Christopher: I deeply resent Noah presented as a military fighter rather than as a man of peace. Come on! Here is a story where God regrets how violent humanity is, and they have to make Noah a martial-arts expert?

In the aftermath, Noah laments that the hunters kill the bison only for their horns — then tends to an injured juvenile bison.
Christopher: I do like the creative idea of Noah’s concern for animals. But why does this have to be in the context of so much violence even from our “hero?” The notion that modern films need such violent “action sequences” is itself part of the problem, now, isn’t it?

Noah tells an authority figure that the Creator mourns the “poisoned husk” that the Earth has become at the hands of men. “We must change,” he says, “we must treat the world with mercy.”
Christopher: Noah is made into an “Earth-First” activist here. I like the environmental message, but not turned into an anti-human message! It is the privilege of the well-to-do to regret so many people on the earth, and overlook how their own wealth and privilege created a great deal of the environmental crisis! Are the masses of poor on the earth, struggling to survive, really the problem? Or is it the greedy corporations and states whose notions of “economic development” led directly to our current crisis?

See video: ‘Noah’ Clip: Russell Crowe Ropes His Family Into Building a Boat ‘to Save the Innocent’

Noah meets “The Watchers,” 18-foot giants with skulls the size of “beach balls.” Text from Genesis appears onscreen, explaining that giants “walked the Earth in those days.”
Christopher: The writers are borrowing heavily from the Book of Enoch here. [Ed’s note: The Book of Enoch is an ancient Jewish religious work ascribed to Noah’s great-grandfather that is not part of biblical canon.] That is a creative decision, but it should probably have been indicated as such. The way (the giants) are portrayed here sounds a bit silly, but I like CGI as much as the next guy, so I will see how they are portrayed!

The Watchers and Noah witness a miracle — a forest sprouting from the Earth. One of the giants says: “Maybe God will forgive us … “
Christopher: But for what? In Enoch, the (giants) who “fell” taught humans how to make the weapons of war! Once again — the writers omit an opportunity to highlight the ancient texts’ own criticism of human violence, and replacing it with … naturally … MORE violence!

Noah wonders out loud whether “a world without men would be a better world,” suggesting that they may not be meant to survive.
Christopher: This is another example of extremist environmentalism at the cost of humanity.

The rains begin, and as Noah prepares to seal the Ark, the horde panics: “Mayhem reigns … 10,000 souls rushing for the safety of the ship.”
Christopher: Isn’t it interesting that the biblical version of the story does not mention other humans trying to get in? It does not dwell on violence and suffering. But the script writers seem to insist on making this a major aspect of the story.

Safely aboard the floating sanctuary after a terrible battle, Noah tells his frightened family the story of creation, including a fleeting reference to Adam and Eve.
Christopher: Nothing about the creation in the Image of God, indicating something important about humanity? No, I don’t suppose this would fit the anti-human, pro-environmental polemic being constructed here. In other words — this “Earth-first” version of the Noah story conveniently omits God’s compassion and care for humanity is something special. Humans are a disappointment because they failed their responsibilities, which were significant, not because they simply exist!

Noah reveals to his family that the plan isn’t to procreate once the waters subside — it’s to make sure man does not carry on in the new world.
Christopher: The entire sub-story, with Noah wanting to kill the last female to make sure all of humanity is wiped out, is contrary to the pro-human narrative of having humans survive in the first place! If the animals were to survive — so, too, were the humans! Also, it is interesting that the writers seem to be carrying on an implicit dialogue with Abraham’s near sacrifice of Isaac … where they wish Abraham would have said, “I can’t do it,” they seem to be pleased to present Noah, in the end, with having to say, “I can’t do it.” The Abraham narrative, of course, is a matter of huge debate for literally hundreds of years, but the writer’s dialogue with it is an interesting decision. But in the end … just which Bible story is being told here?

Conclusion:
Christopher: I believe that film and TV producers have the right to take creative decisions — even with the Bible. All “re-tellings,” whether in a film or in a sermon, are viewpoints — they are all “interpretations.” It would be silly to talk about “accuracy” in a film about Noah, because it is a short moral story with a powerful message, not a historical narrative and description.

However, I think we can take issue with implied messages and implications — and my main concern about the Noah film is its ambiguity with regard to human violence when that seems to be a major element of the original narrative. Why can’t Noah have been a peacemaker in direct contrast to human violence? Isn’t that implied by saving him, when the rest of humanity grieved God because of its violence?

BIO Dr. Daniel L. Smith-Christopher
Dr. Daniel Smith-Christopher is professor of Old Testament Studies, director Graduate Studies in Theology and director of Peace Studies at Loyola Marymount University in Los Angeles, where he’s taught for 24 years. He’s published over 30 scholarly articles, book chapters and texts, including “The Oxford Handbook of Biblical Interpretation,” high-school textbooks, and even “Lost Books of the Bible for Dummies.” Raised Quaker in Portland, Ore., Christopher identifies as a Christian in the Quaker tradition with widespread ecumenical interests; though he lectures frequently in congresses and conferences of the Roman Catholic, Presbyterian, and United Methodist Churches in Southern California, as well as various Quaker meetings. He received his doctorate in Old Testament Studies at Oxford University in 1987.

Dr. Daniel Smith-Christopher is professor of Old Testament Studies, director Graduate Studies in Theology and director of Peace Studies at Loyola Marymount University in Los Angeles, where he’s taught for 24 years. He’s published over 30 scholarly articles, book chapters and texts, including “The Oxford Handbook of Biblical Interpretation,” high-school textbooks, and even “Lost Books of the Bible for Dummies.” Raised Quaker in Portland, Ore., Christopher identifies as a Christian in the Quaker tradition with widespread ecumenical interests; though he lectures frequently in congresses and conferences of the Roman Catholic, Presbyterian, and United Methodist Churches in Southern California, as well as various Quaker meetings. He received his doctorate in Old Testament Studies at Oxford University in 1987.