Several high profile Twitter users — including former President Barack Obama, presumptive Democratic nominee Joe Biden, Elon Musk and Bill Gates, among many others — had their accounts hacked on Wednesday as part of a six-figure cryptocurrency scam.

Both Gates and Musk’s accounts tweeted they would be “doubling all payments” sent to a particular bitcoin address; the tweets said the too-good-to-be-true deal — where users can send $1,000 worth of bitcoin and expect to get back $2,000 worth of bitcoin — would only be going on for about a half-hour. You can take a look at screenshots of the tweets below: 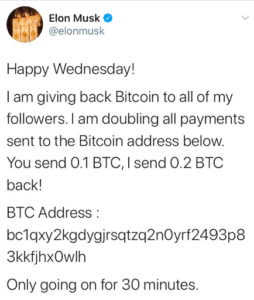 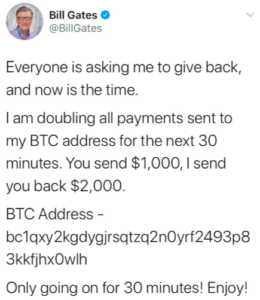 Musk’s account sent multiple tweets along the same lines, but they were all quickly deleted soon after. Gates’ bogus tweet, meanwhile, probably caught many of his followers off guard, considering the Microsoft co-founder has said he’s not a big fan of bitcoin in the past. 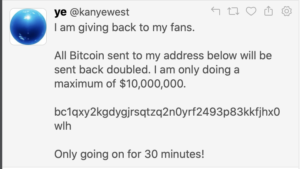 Nearly 12 bitcoin, or about $109,000, was sent to the bitcoin address mentioned in the tweets within the first hour of the hack. You can monitor the account’s transactions by going here.

A number of other prominent users had their accounts compromised soon after.

The FBI in San Francisco told NBC News that it was aware of the “security incident involving several Twitter accounts belonging to high profile individuals” and acknowledged that the hackers apparently sought to “perpetuate cryptocurrency fraud.”

“We advise the public not to fall victim to this scam by sending cryptocurrency or money in relation to this incident,” the FBI told NBC News.

The account for Amazon CEO Jeff Bezos, the world’s richest man, tweeted he was looking to “give back to my community” and shared the same bitcoin address, saying he’d donate up to $50,000,000.  Obama and Biden’s accounts were also compromised on Wednesday afternoon, with both accounts saying they’d double any bitcoin payments sent to the same address mentioned by the other hacked accounts. Apple’s Twitter account, as well as the account for former New York City Mayor Mike Bloomberg were also hit. 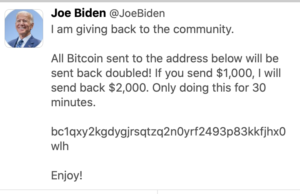 Several other accounts, including @bitcoin and @coinbase, one of the largest cryptocurrency exchanges, appeared to be hacked as well. The accounts tweeted they had partnered with “CryptoForHealth” and would be “giving back 5000 BTC to the community,” before linking to a website. Cash App — which is run by Twitter CEO Jack Dorsey — also had its Twitter account hacked, promising to double bitcoin donations as part of a COVID-19 relief effort.

A rep for Twitter said the company was looking into the matter. The rep later pointed TheWrap to the following message from Twitter’s support account, where the company will be updating followers on the hack.

We are aware of a security incident impacting accounts on Twitter. We are investigating and taking steps to fix it. We will update everyone shortly.

Soon after around 3 p.m. PT, Twitter appeared to disable all verified accounts from sending tweets. Twitter’s support account added that users may not be able to reset their passwords while the company reviewed the hack.