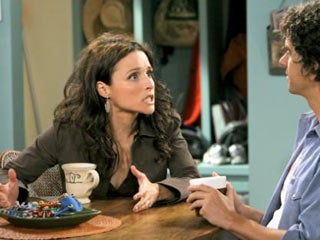 To make way for bumper crop of new productions starring the likes of Tom Selleck and James Belushi, the eye network has axed several underperforming series.

The casualties include the sitcoms "The New Adventures of Old Christine," "Gary Unmarried," and "Accidentally On Purpose" and the dramas "The Ghost Whisperer," "Cold Case," "Numb3rs," and "Miami Medical," TheWrap has confirmed.

Spared in the bloodbath are "Medium" and "Rules of Engagement," both of which CBS has renewed for next season.

The network will announce its full fall slate in New York on Wednesday at the Television Upfronts. The high number of cancellations, many regarding shows that were solid though not spectacular ratings getters, is part of a network wide move to skew younger. CBS has had a notoriously difficult time attracting viewers in the coveted 18 to 49 demographic and many of these shows were perceived as skewing toward viewers who were a bit long-in-the-tooth.

Most of the cancellations were expected, though "Old Christine" a critically acclaimed comedy with Julia Louis Dreyfuss and "Ghost Whisperer," a supernatural thriller with Jennifer Love Hewitt, were thought to have enough partisans to keep them off the chopping block.

"Whisperer" had consistently won its Friday night time slot. "Christine" was considered a modest success on Wednesday, though it never reached the heights it achieved as part of CBS’ Monday night comedy block in its initial years on the air.

There’s speculation that "Old Christine" and/or "Ghost Whisperer" may find a home at ABC. Warner Brothers, which produces Louis Dreyfuss’ sitcom, is reportedly looking for another network to rescue the Emmy winner, and ABC has expressed interest in adding "Whisperer" to its slate.