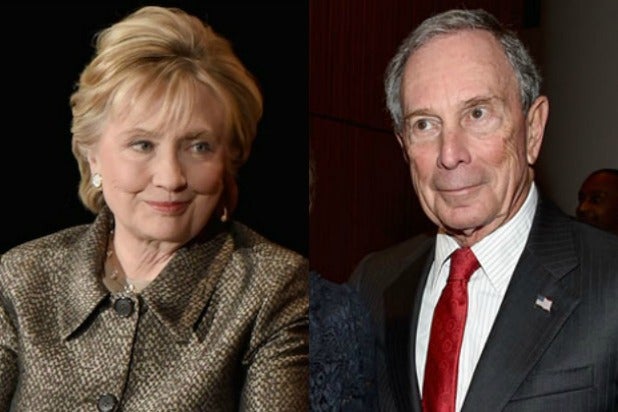 Michael Bloomberg’s campaign denies published reports that he is considering choosing Hillary Clinton as his running mate for the 2020 presidential election, saying, “We are focused on the primary and the debate, not VP speculation.”

A campaign official on the former New York City mayor and Democratic candidate’s team said on Saturday, according to the Drudge Report, that internal polling had determined that the pairing “would be a formidable force.”

A rep for Clinton didn’t respond to TheWrap’s request for comment, but the Drudge Report opposes a statement made by Clinton last week on “Ellen,” after the talk-show host asked her if she’d ever consider being the running mate for one of the current democratic candidates.

“Ah, well that’s not going to happen. But no, probably no,” she told DeGeneres. Watch the full interview here.

Clinton explained her view on the situation by comparing it to the time former President Obama asked her to be Secretary of State.

“I was shocked. I had no idea he was going to ask me, and I turned him down twice. He said, ‘The economy’s in free fall, it’s a catastrophe, I’ve gotta focus on that. We’ve got problems around the world, you go focus on that,'” Clinton recalled.

Also Read: Hillary Clinton on How She 'Became a Kind of Rorschach Test for Women'

“I said, ‘No, no, I’m happy where I am, you get somebody else, I’m sure there’s good people around.’ The second time I said, ‘No, Mr. President-elect, I’m not gonna do it,’ he said, ‘I’m not calling you again until you say yes.’ So I’ll tell you, I started thinking about — I thought if I’d won, and I’d wanted to ask him to do something, I would have wanted him to do that for me.”

“So I never say never,” Clinton continued. “But it’s not gonna happen.”