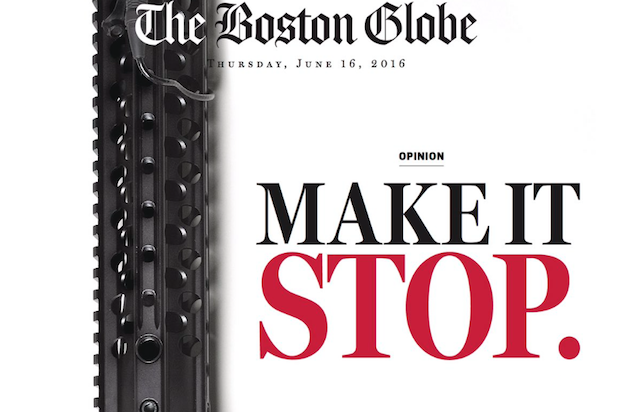 The Boston Globe used an image of an AR-15 with the message “Make It Stop” on the newspaper’s cover Thursday, publishing a searing front-page editorial on gun control and tweeting the names of mass shooting victims.

Gun control has been revived as a topic this week following the deadly terror attack at Pulse nightclub in Orlando that left 49 people dead on Sunday morning. The Globe cover hit newsstands hours after Connecticut Sen. Chris Murphy wrapped up a 15-hour filibuster on gun control, calling for congressional action. On the paper’s cover, a single bullet hole is shown at actual size just below the gun’s ammunition magazine.

The Globe’s editorial kicks off with a powerful message: “Greed, legislative cowardice, advanced technology — that is how we got here. The United States has been pummeled by gun violence since the assault weapons ban expired in 2004. This year, mass shootings have already claimed 61 lives. One class of gun, semiautomatic rifles, is largely responsible. But this nation cannot be a hostage of fear. We can make it stop.”

Running off the presses as we speak, stay tuned. #MakeItStop pic.twitter.com/o8KN8h9Msy

The AR-15-type assault-style rifle that was used in the Orlando massacre is similar to the weapon used in other mass shootings, including attacks at an elementary school in Newtown, Connecticut and a movie theater in Aurora, Colorado. In addition to the editorial, the Globe has been tweeting out the names of mass shooting victims.

The editorial goes on to mention the investment in gun stocks of many 401(k) plans, details the power of an AR-15 and names the Senate members who oppose gun control. The Globe’s #MakeItStop hashtag appears to have been well received on social media, with the exception of several gun enthusiasts.

The AR15 is the most lied about gun in America. #MakeItStop

#MakeItStop do like me and go buy another AR15. Great weapons for home defense, particularly for women. Protect yourself.

So sick of the paranoia. A background check is NOT A BAN. #MakeItStop pic.twitter.com/IdUNExmb8X

The @BostonGlobe has gone crazy on guns and it's pretty impressive. #MakeItStop online campaign naming victims of gun violence all morning.

The @BostonGlobe is doing something terrific right now. They are tweeting out names of victims of mass shootings. Powerful. #MakeItStop

What @BostonGlobe is doing with their Twitter account right now is what social media SHOULD be used for. #guncontrolplease #MakeItStop

At 2 AM the @BostonGlobe began tweeting names of victims gunned down around the US. So many names. So many yet to be tweeted. #MakeItStop