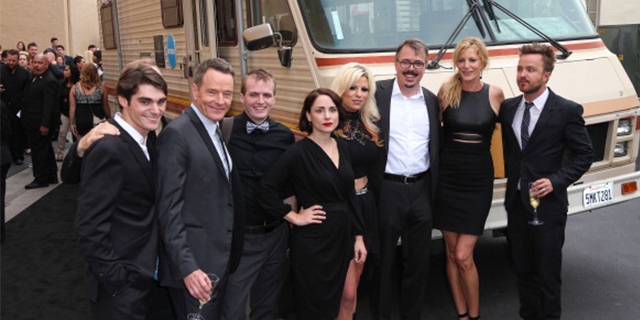 "Breaking Bad's" cast arrived at Wednesday night's premiere of the final eight episodes of AMC's series in signature style, with Aaron Paul behind the wheel of the show's infamous RV with Bryan Cranston riding shotgun.

Once deposited on the black carpet, the stars talked with TheWrap about the surprises in store.

Paul promised a "violent punch to the throat, and it's never going to let up. It's a constant, brutal sprint to the finish line," he told TheWrap at the event on the Sony lot.

"It's an exciting last eight," promised Bob Odenkirk, whose Saul Goodman character may get a spinoff.  "It's full of surprises and the last one is probably going to be the biggest surprise of all.

Cranston showed off a lasting memento from the show: He and other cast members had the "Br" and "Ba," from the show’s logo, tattooed onto their fingers.

“We were finishing our last day of shooting, the very last time, and we were having a couple of drinks at a bar and they brought in a tattoo artist," he explained. "And we thought 'Why not? This is the time to do it."