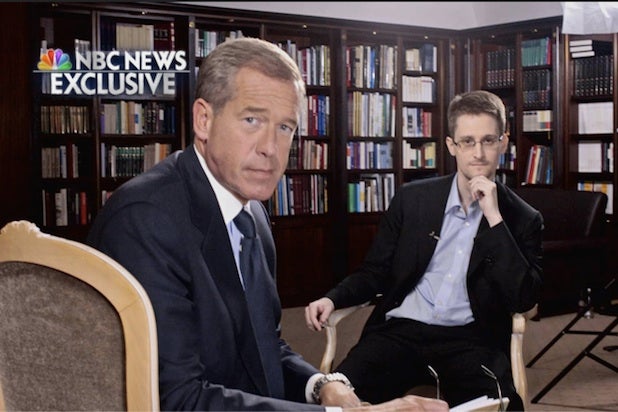 Brian Williams interviewed Edward Snowden on Wednesday night but not before jumping through a lot of hoops.

The weary “Nightly News” anchor told the New York Times he had to go through “unannounced plane travel, lost luggage, hotel bookings under assumed names and two days sequestered in a room with a view of Red Square.”

See video: Brian Williams Raps the News on Fallon’s ‘Tonight Show’ – And The Guest Rapper Will Blow Your Mind

Williams’ account sounds like a reenactment of the travel scenes in “Home Alone” with the newsman nearly missing his Moscow connection and losing his bags in the process.

According to a NBC spokesperson, Williams flew overnight on Monday May 19 after anchoring “Nightly News” in New York. The interview took place on Wednesday in the early morning east coast time, mid/late afternoon Moscow time.

When Williams arrived, he realized he had lost all of his clothes and feared he would have to conduct the interview “in a white terry cloth bathrobe.” Fortunately, he was able to obtain a change of clothes.

Williams then flew back from Moscow to New York overnight Wednesday/Thursday, and — after traveling 11,000 miles in 72 hours — went straight on to Nashville, where he kept his promise to speak at a high school graduation.