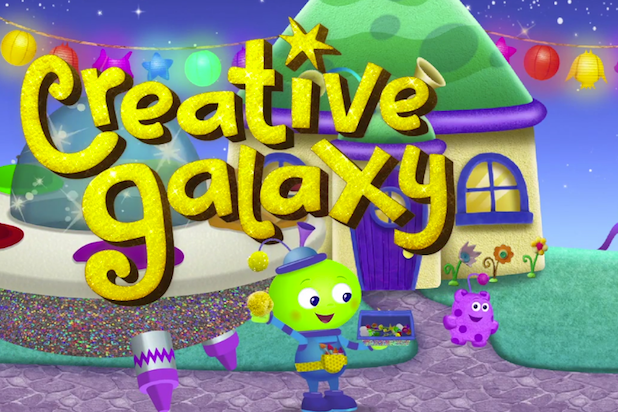 Vincent Van Gogh and Georges Seurat may not be part of your kids’ kindergarten curriculum, but Amazon is betting they will be central characters of the next “Blue’s Clues.”

“Creative Galaxy,” one of Amazon’s first kids’ shows, debuts on the e-commerce giant’s instant video service Thursday.  Amazon is trying to strike a delicate balance between education and entertainment with its kids’ programming, a combination Angela Santomero knows well. She co-created “Blue’s Clues,” the Nickelodeon show about a man and his dog who solve puzzles.

“Creative Galaxy” encourages kids to make art — and learn its history in the process. It stars a fella named Arty who breaks the fourth wall and speaks to the camera — a green Frank Underwood, if you will —  and features the voices of “Daily Show” correspondents Samantha Bee and Jason Jones as Arty’s parents.

The first episode discusses pointillism, a painting technique invented in the late 19th century and popularized by artists such as Seurat. TheWrap spoke with Santomero about her new show, working with Amazon and helping kids embrace art.

Did you create this show for Amazon?
I had the concept and a pilot for an art-themed show, and it was pretty clear Amazon was the best partner in terms of the curriculum and what they were trying to do. It could be a signature show for them.

Why did you want to make a show about art?
“Blue’s Clues” was about kindergarten readiness and I made a reading show; I am zeroing in on what kids need and love. The idea of arts and creative, it’s the future. Given how many arts programs are being cut from schools, this is something we need. This is about how we can around out the curriculum.

How do you strike a balance between telling narrative and being didactic?
Didactic and pedantic are two of the worst words. If you put a lesson in a show; no one will want to watch. I have a background in child development, and kids will either throw it all away or digest it. You need to write a show kids will be excited about.

We write a script, turn it into a storybook and take it into the kids and read it to them. We want them interacting and playing with the characters. We want the kids to be a part of our world.

Is the study of childhood development common among people who produce kids shows?
I found my way because I was so different. I can balance the two. Research never wins; kids always win in terms of what they are looking for and the level of creativity. When you find an Amazon who appreciates that, that we come from that world, it makes for a better match.

Speaking of bringing them in, at what point did you decide Arty is going to adress the audience?
I want the audience to be a part of the experience; I wanted kids to propel the storyline and be a part of it. If you can get kids invested in interacting, they will learn more. It was never a question of whether the character would talk to the audience, but how to use it.

You have to pause the action to give the kids time to react to the questions Arty asks. How do you decide how long you can pause it?
That’s the secret sauce; I can’t tell you exactly. When you watch a kids’ show, the pacing feels slow.

What did you take from your other shows and apply to this one?
This has a lot of the same formal features — talking to the audience, bringing them in. We didn’t shy away from words like pointillism or Seurat and Van Gogh; the kids are with you because of the way we write it. it’s real.

Did the show change after you partnered with Amazon?
When parents were giving feedback, they were applauding all the masters. We are using art as a resource for life, and thy loved that. They wanted more.