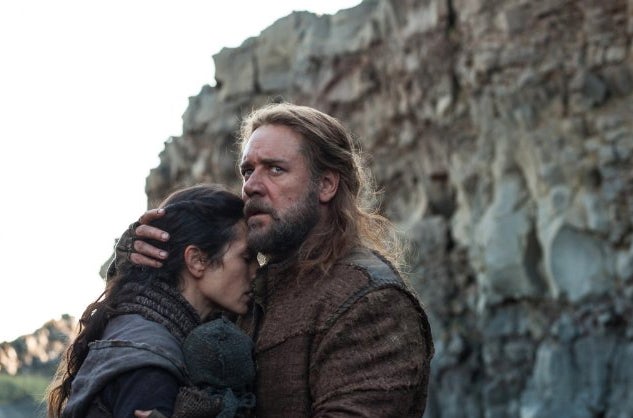 Aronofsky, whom Paramount entrusted with a $130 million movie after the success of “Black Swan,” knew nothing about it and was “not happy” to learn about it in the press, according to that individual.

Paramount and Aronofsky declined requests to comment for this story. The studio issued a release Thursday announcing that it would add a religious disclaimer to the film and all its marketing materials. The change came after months of conversations between the studio and religious leaders.

“The film is inspired by the story of Noah,” the statement added to the film at the request of National Religious Broadcasters, reads. “While artistic license has been taken, we believe that this film is true to the essence, values, and integrity of a story that is a cornerstone of faith for millions of people worldwide. The biblical story of Noah can be found in the book of Genesis.”

A secular, Jewish Harvard graduate from New York City, Aronofsky has stepped square into the crosshairs of a Christian community to whom his stature as a director means little. What he does with a story they revere does.

Aronofsky has told associates he does not want to do anything to hurt the movie, but does not want to pander to his audience or the studio tip-toeing around his creative vision. He and writer Ari Handel have contemplated a movie about Noah for 16 years.

NRB boardmember Phil Cooke, who has seen the movie and spoken with Paramount about it, told TheWrap the disclaimer was necessary due to “the controversy in the Christian community about [Aronosfky’s] telling of story.” Cooke has encouraged the religious community to be more open to the film, which is “more of an inspired movie than an exact retelling.”

It would seem apparent to anyone that a filmmaker takes artistic license when making a movie, but such is the sensitivity of the Christian community to films about their holy scripture — and the importance of that community to the movie’s future.

The studio and the director had already spent months debating which cut of the movie they would use, as Paramount tested several of its own versions. Paramount believes it is supporting Aronofsky’s vision, and Aronofsky believes Paramount is focused on presenting the right message to the Christian community.

Prominent Christian activists and scholars have expressed concern about Aronofsky’s retelling of one of the most famous stories in the most sacred text in the Western world from its inception. The criticism began more than a year ago, when an older version of the script leaked. After reading a copy, Brian Godawa wrote an article for Breitbart.com arguing Aronofsky’s intention appeared to be turning the story of “Noah” into an environmental parable.

“If you were expecting a Biblically faithful retelling of the story of the greatest mariner in history and a tale of redemption and obedience to God you’ll be sorely disappointed,” Godawa wrote. “Noah paints the primeval world of Genesis 6 as scorched arid desert, dry cracked earth, and a gray gloomy sky that gives no rain – and all this, caused by man’s ‘disrespect’ for the environment. In short, an anachronistic doomsday scenario of ancient global warming.”

Godawa has since expressed interest in seeing the movie, and made clear his objections were based on the script and not the finished movie.

“I critiqued the script and not the movie,” Godawa said, noting that he would support it provided the film reflects the themes of Genesis. There are those for whom that will not be enough.

“The religious community is highly particular about being literal with the bible,” Godawa said. “Sometimes the standard of literalness is not even biblical itself. They go overboard.”

Paramount, eager to protect its investment, has tried to assuage any fears before the movie opens.

Just a week earlier the marketing change, Paramount issued another press release to condemn a story in Variety based on a survey issued by Faith-Driven Consumers. Paramount said the story, which said a survey indicated unease about “Noah,” was inaccurate since the survey question made no reference to “Noah.”

Paramount vice chairman Rob Moore recently told another trade paper that the movie reflects “the key themes of the Noah story in Genesis — of faith and hope and God’s promise to mankind.” Moore, a devout Christian, is particularly sensitive due to his own religious beliefs, but more than anything Paramount cannot afford to alienate the religious community.

“They are obviously doing it because they want to make money,” Godawa said. “People are critiquing the movie without seeing it, so Paramount doing this is a good idea.”

Christians can be a powerful ally at the box office, as evidenced by the success this past weekend of “Son of God,” as well as past films such as “The Passion of the Christ.” Yet if you alienate that community with a religious movie, studios are left licking their wounds. Witness the protest that sprung up around Martin Scorsese‘s “The Last Temptation of Christ.”

“Not once did I ever get the feeling they were anything but serious,” Cooke wrote recently. “They didn’t mock the story.”