Cardi B is once again criticizing Republicans while discussing police brutality on her social media.

Reacting to a video of GOP Rep. Glenn Grothman decrying her music on the House floor, the rapper tweeted, “This gets me so mad ya don’t even know! I think we all been on the edge this week since we seen police brutality back to back including watching one of the biggest case in history go down DUE to police brutality but wait ! This is wat state representative decide to talk about,” she added, referencing the Derek Chauvin verdict.

She added a thinking emoji. 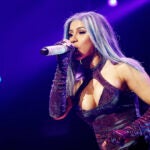 In his remarks, Grothman said, “I’ve received complaints in my office — and rightfully so — about Cardi B and the Grammys. They wonder why we are paying the FCC [and] if they feel that this should be in living rooms across the nation.”

The FCC did receive a number of complaints in February when Cardi B and Megan Thee Stallion performed their hit song, “WAP,” on the CBS broadcast.

He looped in a criticism of Democratic Vice President Kamala Harris, who, he said has promoted the rapper’s music. Then, he said, “Wake up, FCC, and begin to do your job! The moral decline of America is partly due to your utter complacency.”

Cardi B has been vocal lately about Republicans — particularly ones with large social media platforms — who have “been real [quiet]” in the wake of the police killing of Daunte Wright and pepper spraying of Army lieutenant Caron Nazario.