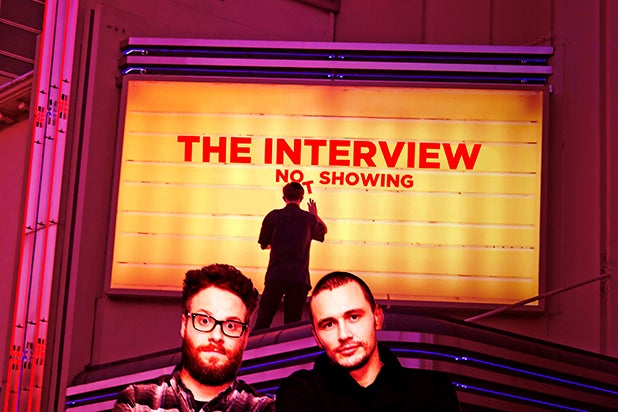 Carmike Cinemas has canceled the nationwide Christmas Day release of Sony’s “The Interview,” the first theater chain to do so on the day hackers threatened 9/11-like attacks on theaters that showed the movie, an individual with knowledge of the situation told TheWrap.

The hacking group, which has claimed responsibility for last month’s massive cyberattack that paralyzed the studio and resulted in the theft of thousands of sensitive documents and emails, had demanded that the studio pull “The Interview.”

The comedy stars Seth Rogen and James Franco as U.S. journalists who are asked by the CIA to assassinate North Korean leader Kim Jong-un. North Korea last summer warned that the film’s release would be an “act of war that we will never tolerate,” and said that the United States will face “merciless” retaliation. Its government on Dec. 6 denied it was behind the Sony hacking, but called the cyberattack “a righteous deed” and said that it could be the work of its supporters.

The Columbus, Georgia–based chain has 276 theaters with 2,904 screens. An individual with knowledge of the situation said Sony was prepared to go forward with the release, but Carmike responded they were pulling their dates.

Tuesday’s threat of violence and another earlier post from the hackers that spoke of a “Christmas present” brought concerns over public safety to the fore. While the Department of Homeland Security said that it had found no evidence of credible threat on Tuesday, Sony gave theater chains that had booked the movie the option of not running it.

The majority of the busiest theaters are in shopping malls, and the landlords of those sites put pressure on the theaters to drop the film, according to insiders familiar with the discussions. With the holiday shopping season in full swing, several major mall owners voiced concerns that fears of trouble or a heightened security presence could keep shoppers away.

For Sony, scrapping the theatrical release of “The Interview” will result in financial hit of at least $100 million. Its production budget was $44 million, most of the spending on the media campaign was done and there will likely be payments to partners.

That number pales in comparison with the loss of hundreds of millions that Sony potentially faces from the hacking and data dumps, which included personal info on 47,000 Sony employees as well as A-list talent that the studio had done business with. On Tuesday, two civil suits were filed by current and former employees.

Also Read: Hollywood on Edge as Sony Tells Theaters They Can Pull ‘Interview’ After Terror Threat

With Carmike out, the focus shifts to the other major chains including the Regal Entertainment Group, which is the largest with 574 theaters, mostly in the Southeast. Kansas City-based AMC Entertainment with 344 theaters and Texas-based Cinemark Theatres with 322 sites are the next largest and have yet to announce a decision.

If the theater chains opt out of showing “The Interview,” it would take some of the onus off Sony. The studio is faced with the choice of pulling it and being seen as knuckling under to the hackers and not supporting the filmmakers, or going ahead with the release and facing more damaging data dumps and the possibility of violence at theaters.