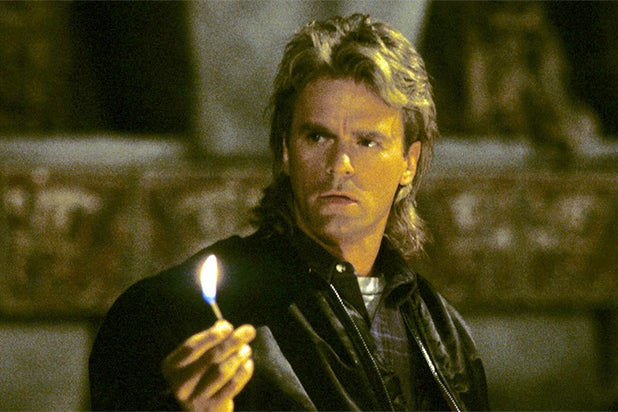 CBS has ordered to series four new dramas and two new comedies for the 2016-17 season, including the high-profile reboots “MacGyver” and “Training Day.”

On the comedy side, the Matt LeBlanc-led “Man With a Plan,” and “The Great Indoors” starring Joel McHale were ordered to series.

“Training Day,” from Jerry Bruckheimer Television and Fuqua Films in association with Warner Bros. Television, is a crime thriller that begins 15 years after the events of the feature film, and follows an idealistic young police officer (Justin Cornwell) who is appointed to an elite squad of the LAPD where he is partnered with a seasoned, morally ambiguous detective (Bill Paxton). Drew Van Acker, Katrina Law, Lex Scott Davis and Julie Benz also star.

“MacGyver” sees Lucas Till take over the role of a 20-something MacGyver as he creates a clandestine organization where he uses his knack for solving problems in unconventional ways to help prevent disasters from happening.

Peter Lenkov, Henry Winkler, Lee Zlotoff, James Wan, Michael Clear are executive producers on the drama, which is from CBS Television Studios in association with Lionsgate. David Von Ancken directed the pilot and is also an executive producer.

Also Read: 'Life in Pieces' Laughs Its Way to Season 2 Renewal at CBS

On the comedy side, CBS Studios’ “Man With a Plan” follows a contractor (Matt LeBlanc) whose wife goes back to work starts spending more time with his kids and discovers the truth every parent eventually realizes: his little angels are maniacs. Jeff & Jackie Filgo, LeBlanc, Michael Rotenberg and Troy Zien are executive producers, while James Burrows directed the pilot.

“The Great Indoors” follows an adventure reporter (Joel McHale) who must adapt to the times when he becomes the boss to a group of millennials in the digital department of the magazine. Stephen Fry, Chris Williams, Shaun Brown, Christopher Mintz-Plasse, Christine Ko, Susannah Fielding also star.

CBS has renewed most of its shows, including “The Big Bang Theory,” “NCIS,” “Mom,” “Madam Secretary” and “Scorpion.”

“Life in Pieces” is the first freshman CBS series to land a second season order, with “Supergirl” getting a renewal but also a move to The CW. “Limitless” and “Code Black” are still waiting in limbo. However, CBS chairman Les Moonves has said previously that the network plans to renew all of the series that debuted this season.

“Angel From Hell” is thus far the only new CBS series to be officially canceled. “Rush Hour” premiered on Mar. 31, while “Criminal Minds: Beyond Borders” debuted Mar. 16.