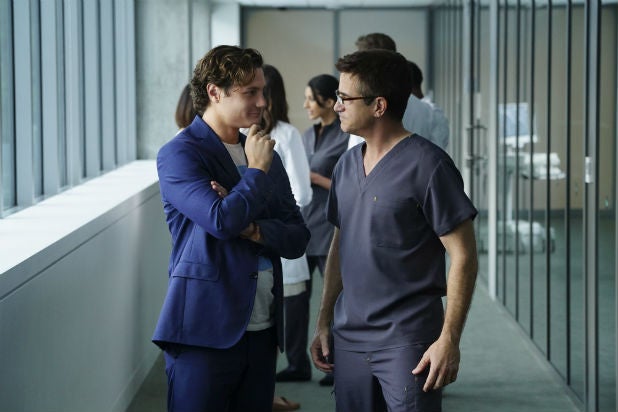 Over its six-season run, Jason Katims‘ groundbreaking series “Parenthood” succeeded because it related a universal theme inside a small story. Three generations of the Braverman family navigated the headwinds and rocky waters of modern life, and did it in ways that were believable and relatable for millions of viewers.

In Katims’ new show “Pure Genius,” premiering Thursday on CBS, the focus isn’t the nuclear family. In this ambitious but formulaic medical drama, doctors and nurses — a nuclear medicine family — unite behind the singular dream of a tech billionaire to provide health care for those suffering the rarest diseases, and do it free of charge.

It’s a vision that unifies medicine and technology without the middleman, but the show’s tried-and-true format and high-gloss look can’t summon enough actual reality to make this fanciful conjuring ring with the truth it needs, at least not yet.

In the pilot, Walter Wallace (played by Dermot Mulroney) a renowned surgeon with an occasional maverick streak, is fired from his Cincinnati hospital because he tried, in vain, to save a patient’s life with a drug unapproved by the FDA. Six months later, visiting San Francisco, Wallace meets (Augustus Prew), the billionaire designer of a killer app that could revolutionize medical diagnostics. Bell created, and hand-picks doctors for, Bunker Hill, a state-of-the-art medical facility focused on controlling or curing uncommon maladies.

Wallace, heavily courted for the chief of staff job, shows up at Bunker Hill for a get-acquainted visit, and it’s left to him to stroll around the grounds until he feels at home, which takes some doing. Stiff, stoic, a fish out of the comfortable water of traditional medicine, Wallace is initially on the outside looking in.

To go by the pilot and various subplots, “Pure Genius” is staking out broad social territory: exploring race, ethnicity, domestic abuse, nanotechnology, and the bioethical dilemmas arising from each of them.

But for all its cutting-edge aspirations, the series already reflects reliance on the familiar constructs of ensemble television drama. In everything from its multicultural casting to its us-against-everybody stakes, “Pure Genius” can count series from “St. Elsewhere” to “ER,” from “House” to “Grey’s Anatomy,” from “Chicago Med” to “Code Black” in its DNA — a fact that’s both strength and weakness.

“Pure Genius” sure looks like the world it wants us to believe in. Bunker Hill’s visual esthetic — all blue light, white walls and smoked glass — cribs from every Big Pharma TV ad you’ve ever seen. The show’s sleek, antiseptic production values scream “the future!” And maybe that’s part of the problem.

The ensemble format anchors the show in the familiar, but much of the show’s everyday technology looks so out there, like a product of the future, we’re invited to think that’s when the show is set. For viewers to care, we have to believe what we’re seeing is a going concern pertinent to our lives right now. Are we in the present day or the very-near future? Right now, we’re never quite sure.

In this world, money and imagination are the important levers for achieving unfettered medical advances. “There’s no hierarchy, no offices, best idea wins,” Bell says, celebrating the Bunker Hill ethos. In one scene, Bell tells his staff about new technology that enables brain-to-brain communication — just the thing for a teenage coma patient who’s been unresponsive for months. Bell’s solution? Buy the company, and immediately put the new tech to work.

The truth is more complicated than Bell blithely writing a check and taking mainstream medical protocol out of the equation. Whether Katims & Co. choose in the future to address the need for peer reviews, clinical trials and the demands of a certain important agency — the FDA — is still to be seen.

Sometimes the contrasts — Bell’s soft-shouldered, easygoing, West Coast cool against Wallace’s circumspect, buttoned-down caution — are too on-the-nose for their own good. And a black doctor with a gangbanger past? Please. I don’t think it’s been done before, and for good reason: It’s predictable.

Not so for one subplot: James Bell has serious skin in the game. Wallace discovers that Bell carries a gene for Gerstmann-Sträussler-Scheinker syndrome (GSS), a real fatal neurological disease. Wallace asks a question that’s central to the principle of billionaire philanthropy, and whether Bunker Hill is ultimately one man’s monument to himself: “Are we here to save the world, or are we all here to save James Bell?”

Prew, a British actor (“The Borgias,” “Kick-Ass 2”),  plays the laidback billionaire with puckish charm, but his sunny disposition is undercut when he agrees to accept a patient with GSS … and looks into the slack, vacant face of someone who could be him in five years. Prew’s journey from philanthropist to patient should be an emotionally rich subplot worthy of exploration.

The biggest challenge to “Pure Genius” may be its time-slot competition. “The Blacklist” (Thursdays at 10 on NBC) and “How to Get Away With Murder” (the same on ABC) are formidable rivals that are already appointment viewing.

Despite its by-the-numbers side, “Pure Genius” deserves a chance to find its audience, thanks to Katims’ track record, and the breadth of topical issues on its radar. It should be fun to watch how Dr. Wallace, Bunker Hill and the James Bell check-writing machine make their way around the medical establishment, even as they realize that that establishment isn’t going anywhere. Just like the competition on Thursdays at 10.