First came the branded eggs. Then the Elvis-blaring audio chips. Next were the odd, faux rum taste strips.

Now, in the latest stunt attempting by the network to promote its fall slate, CBS on Wednesday unveiled a print advertisement with a small, embedded video screen that will enable some readers of Entertainment Weekly to sample 40 minutes of its upcoming shows. 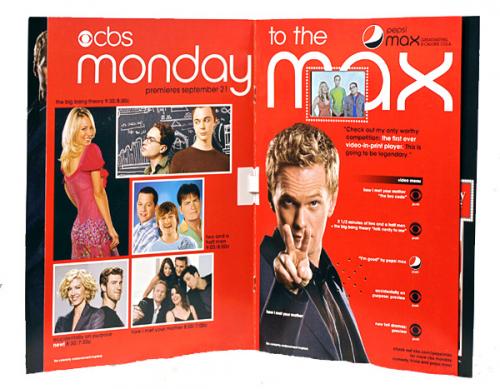 It’s the first use of a video player in a print ad, executives at CBS, Entertainment Weekly and Americhip, the company that produced the "video-in-print" technology, said.

The video player will be inserted into subscription copies of Entertainment Weekly’s Sept. 18 Fall TV Preview in New York and Los Angeles.

The program will start with a brief introduction from the cast of "Big Bang Theory." That’s followed by clips from "How I Met Your Mother," "Two and a Half Men" as well as previews of "Accidentally on Purpose," a new comedy, and dramas "NCSI: LA," "The Good Wife" and "Three Rivers" are also included in the video player.

The clips can be accessed by a video menu on the right side of the page.

The ad — which refers to "CBS Monday to the Max" and includes both the CBS and Pepsi logo — is the result of a new, year-long partnership with Pepsi to promote its Pepsi Max beverage. One of  the videos included in the ad is a Pepsi Max ad.

The "Monday to the Max" partnership also will include a microsite, "Thirsty for Comedy?!" TV spots, screenings on college campuses and a party in L.A.

There is no Pepsi Max product placement in the CBS shows, and such a deal was not part of the discussions, said George Schweitzer, president of the CBS marketing group. The ad buy, orchestrated, in part, by the ad agency Omnicom OMD, was not part of CBS’ Upfront, the companies said.

"It’s an opportunity to provide video samples to entertainment enthusiasts off the television screen for the first time," said Schweitzer.

Schweitzer declined to reveal how much the ad cost to produce. "When we saw it, our first thought was we’d never be able to afford it," said Frank Cooper, chief marketing officer at Pepsi-Cola North America. "This late in the year, with budgets gone, no way."

The "Monday to the Max" partnership also will include a microsite, "Thirsty for Comedy?!" TV spots, screenings on college campuses and a party in L.A. But there will be no Pepsi Max product placement in the CBS shows, and such a deal was not part of the discussions, Schweitzer said.

"We feel it’s part of the future," he said, adding: "Plus it’s just really cool."