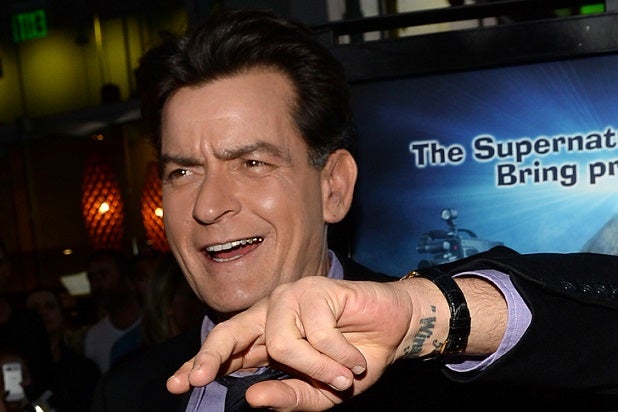 Charlie Sheen has once again directed his ire toward his former show.

Sheen, who was replaced by Ashton Kutcher on the hit CBS sitcom “Two and a Half Men” following a spree of bizarre behavior on Sheen’s part, has lashed out at his replacement on Twitter, calling him “lame” and, worse yet,”really lame.”

Sheen’s social-media blitzkrieg against Kutcher began on Sunday, when he posted a photo of his former “Men” co-star Jon Cryer with Kutcher.

Sheen added the hashtags #NiceTryCanonBoy and #CH, seeming references to Kutcher’s endorsement deal with Nikon cameras, and to Sheen’s old “Two and a Half Men” character, Charlie Harper.

By Monday, Sheen must have experienced some backlash — because he published an update to his supposed detractors, along with an even bigger insult hurled at Kutcher.

“Hey relax everyone! read the hash tag! oh and Jon I’m so sorry I insulted your sidekik I meant REALLY lame,” Sheen wrote, along with the hashtag “#HyLmN.” (Your guess is as good as ours on that one.)

Also read: Charlie Sheen on Selma Blair’s ‘Anger Management’ Exit: ‘It Was Not About Our Relationship’

Sheen also asked Kutcher to stop “barfing” on “Two and a Half Men,” while making a reference to Kuthcer’s former reality prank show “Punk’d.”

Sheen, who was ousted from “Two and a Half Men” in 2011 and currently stars in the FX adaptation of the film “Anger Management,” hasn’t been shy about criticizing the show since his departure. He’s characterized the series as “dead” and said that Kutcher sucks on the show.

However, he recently indicated his interest in playing nice with his former “Men” boss and arch nemesis Chuck Lorre, reaching out across (what else?) Twitter to tell Lorre, “I have an idea that u need to hear after I make amends to you and yours, which I will do in person.”