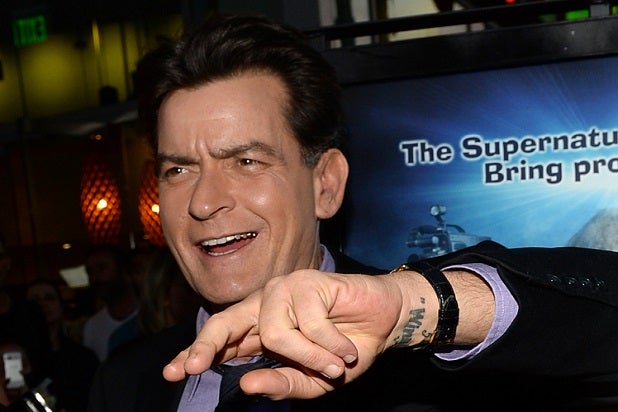 Charlie Sheen, ready to make nice again with his former “Two and a Half Men” boss? As unlikely as it may seem, it appears to be so.

Sheen, who was famously ousted from the CBS hit in 2011 after a string of bizarre behavior that included a feud with “Men” executive producer Lorre, seemed to extend an olive branch to Lorre via his Twitter account on Sunday, and even suggested that he might want to work with Lorre again — after proper amends are made.

Also read: Charlie Sheen on Selma Blair’s ‘Anger Management’ Exit: ‘It Was Not About Our Relationship’

. “I have an idea that u need to hear after I make amends to you and yours.which I will do in person. xox, C.”

Sheen included a photo of the People’s Choice Award that “Men” won in 2007 along with the message.

In the period running up to Sheen’s dismissal from the series, the actor had very public unkind words for Lorre, calling the producer a “maggot” and a “clown.”

Though Sheen subsequently apologized during an appearance at the 2011 Emmy Awards, he has blasted the show, which replaced him with former “That ’70s Show” star Ashton Kutcher, at one point calling it “dead.”

Should Sheen want to work on another project with Lorre — and should Lorre be agreeable with the notion — it is unclear if Sheen’s schedule would allow for it. The actor’s television adaptation of the film “Anger Management,” which airs on FX, was given a 90-episode order after it drew satisfactory ratings with its first 10 episodes, which would seem to keep him pretty busy.

Perhaps Lorre will address the issue in the vanity card that appears at the end of his series this week.