TheWrap magazine: ”I wasn’t used to going into a place, getting attached to it and to people and then leaving it behind,“ says the writer-director whose next film will be Marvel’s ”The Eternals“

A version of this story about Chloé Zhao and “Nomadland” first appeared in the Actors/Directors/Screenwriters issue of TheWrap’s awards magazine.

Anybody who’s tried to get in touch with Chloé Zhao over the last few years is probably familiar with the messages that come back from her reps. “She’s traveling.” “I’m not really sure where she is right now.” “She’s someplace where there’s no reception.”

“No reception? Yeah,” Zhao said with a laugh. “I sometimes feel there’s so much being put on us — our jobs, our relationships, bills and responsibilities — that I have no idea who I am and what I want to say. As a filmmaker, that’s a scary feeling. So when you pack up some stuff and go to a place where nobody knows who you are, and you have no reception, you hear yourself better, and it makes me less anxious about the choices I’m making. I just feel like we all have that desire to just rediscover ourselves when we can shed everything.”

Rediscovery and movement are at the core of Zhao’s new film, “Nomadland,” which opens Friday after a string of festival appearances that helped make it the first film ever to win the grand jury prize at the Venice Film Festival and the Audience Award at the Toronto International Film Festival. 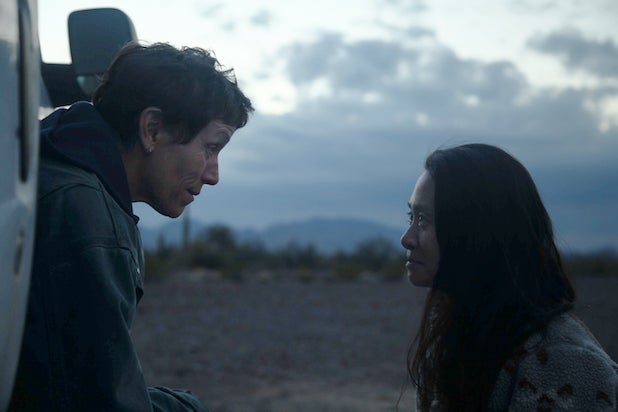 Based on the nonfiction book by Jessica Bruder, it follows Fern (Frances McDormand), who loses her job and her house when a plant in her small Nevada town shuts down. She falls into a community of nomads, living in their vans as they travel around the American West looking for work.

McDormand and David Strathairn slip effortlessly into the style of previous Zhao films like “The Rider” and “Songs My Brother Taught Me”; they’re surrounded by nonprofessional actors, with the quiet naturalism of the performances playing out against the gorgeous desolation of western deserts and hills.

The film, Zhao said, came from a desire to make a road movie of some kind, though she initially envisioned it as focusing on young people who hit the road. “I’d seen some older nomads around, but I didn’t know how big of a movement it was, or what it’s like for someone in their twilight years to hit the road. I was very drawn to that idea.”

Also Read: Frances McDormand Will 'See You Down the Road' in Hopeful New 'Nomadland' Trailer (Video)

She wrote a script drawing on some of the people in Bruder’s book, but McDormand also looked inward to create the character of Fern. “We got to know some of the archetypes in the book, and we picked from those stories but also drew from Frances’ own life. We played a lot of games of What if? What if she never made it as an actress?”

The film, Zhao added, left her drained in a way she’d never before experienced. “The road-movie aspect wasn’t easy,” she said. “I was constantly moving, and I felt emotionally drained by the end of the film. I wasn’t used to going into a place, getting attached to it and to people and then leaving it behind.

“When I made the first two films, I’ll see those guys on the weekend at a powwow or a rodeo. And this time, when I left them behind, I’ll probably never see them again. That feeling took a toll on me.”

Like all of Zhao’s films, “Nomadland” feels like a quintessentially American story, from the lonely Western spaces to the Amazon warehouse. But that fascination with America, she said, was born long ago when she was growing up in China. “Growing up in the ’90s, we were all fascinated with America — everything from Michael Jordan and Michael Jackson to TV and pop culture and movies. The pop culture of America was huge.”

But, she admits, U.S. pop culture has little to do with the America depicted in her films. “I spent my formative years obsessed with the pop culture of America and believing that’s what the country is,” she said. “But when I got here and lived in downtown L.A. for my last year of high school, I was shocked by what I saw in this country and didn’t understand. That made me interested in studying American politics in college, and it made investigating the countercultures and challenging the status quo part of my journey.”

Next up on her journey is the Marvel movie “The Eternals,” which figures to be a dramatic departure from the small-scale films she’s made so far. “I’d be bored if it was just an extension of what I’ve done,” she said. “I want to be able to challenge myself and learn a new way of filmmaking, but also keep the things that I’ve learned from previous films to keep building and make them better.

“The things that work for me, I try to take with me as much as possible into a new world,” she added. “It was the same as going from ‘The Rider’ to ‘Nomadland’ — I took things from ‘The Rider,’ but the challenge was how do we do it with Hollywood actors. It’s the same way with ‘The Eternals’ — there are many new challenges, but I try to keep what I learned on the other films.”