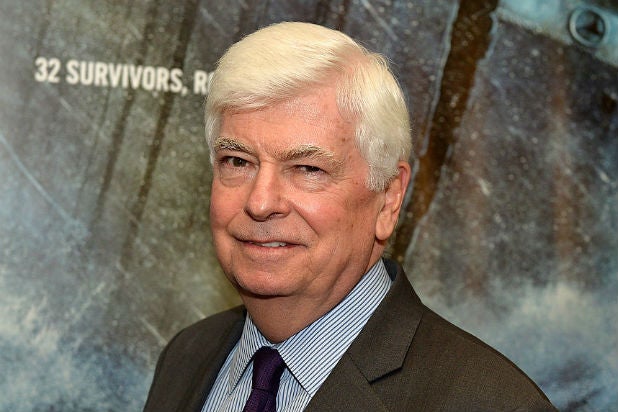 Motion Picture Association of America Chairman and CEO Chris Dodd is stepping down from his position on September 4, he announced on Friday.

Dodd will be replaced by Charles Rivkin, former U.S. Assistant Secretary of State for Economic and Business Affairs.

Dodd, who served six years in the position representing, is credited with prioritizing the digital age in his representation Hollywood’s six biggest studios in Washington, D.C.

“Chris has transformed the MPAA into a global association for the digital era and dramatically increased access around the world for U.S. films and television programming.,” said Walt Disney Studios Chairman Alan Horn.

“With over 70% of total box office revenues generated overseas, and increasing focus on television and OTT content, Chris’s engagement and effective negotiation in these areas delivered impressive results,” Horn added.

“Protecting copyright is the hallmark of Chris’ leadership at MPAA and he helped create a fully integrated, global online antipiracy operation,” Snider said.

Former U. S. Senator Christopher Dodd, Chairman & CEO of the Motion Picture Association of America (MPAA), announced today that he will step down from his position as CEO on September 4 and from his position as Chairman at the end of the year. The MPAA board will meet tomorrow (April 29) to name Charles Rivkin, former U.S. Assistant Secretary of State for Economic and Business Affairs, as Dodd’s successor. Ambassador Rivkin will join MPAA September 5, and the two executives will work together to complete the transition by the beginning of next year.

Dodd has served as Chairman & CEO of the MPAA since March of 2011. During his tenure, he is credited with helping move the MPAA into the digital age, making content protection a priority domestically and internationally (with more than 20 memos of understanding reached with foreign governments), expanding the U.S. presence in the Chinese entertainment sector with the completion of the 2012 and 2015 agreements opening China’s film market and dramatically increasing revenue sharing for U.S. studios, as well as furthering the MPAA’s efforts in diversity and inclusion. Notable content protection successes include law enforcement action against large-scale pirate sites such as MegaUpload and KickassTorrents, 1,500 infringing websites blocked worldwide, and groundbreaking voluntary initiatives with domain name registries, payment processors, and other intermediaries.

“Chris has transformed the MPAA into a global association for the digital era and dramatically increased access around the world for U.S. films and television programming. With over 70% of total box office revenues generated overseas, and increasing focus on television and OTT content, Chris’s engagement and effective negotiation in these areas delivered impressive results,” said Alan Horn, Chairman of The Walt Disney Studios.

“Protecting copyright is the hallmark of Chris’ leadership at MPAA and he helped create a fully integrated, global online antipiracy operation,” said Stacey Snider, Chairman and CEO, 21st Century Fox. “His leadership in promoting copyright in the EU Digital Single Market process and preventing harmful FCC regulation of set top boxes in the U.S. set the precedent for defending the rights of creators in the rapidly evolving digital ecosystem.”

“Chris’ strong leadership of the MPAA and the dynamic global organization he fostered is a lasting legacy,” said Ron Meyer, Vice Chairman, NBCUniversal and Jeff Shell, Chairman, Universal Filmed Entertainment Group. “Charlie Rivkin is the right person to build on that legacy and lead us forward, promoting U.S. film and television production and increasing opportunities for global audiences to be entertained and inspired. Charlie’s stellar global track record in advocacy and diplomacy and his extensive experience in the creative industry have well prepared him for this opportunity.”

“Charlie Rivkin is an excellent choice to lead MPAA into the future, and I look forward to working with him for a smooth and successful transition. I’m honored to have led the MPAA for more than six years and extremely proud of what we accomplished,” said Dodd. “Our focus has been making our members’ films and television programs more accessible to worldwide audiences while furthering IP protection globally. I can confidently say we’ve made significant strides in both areas.”

Rivkin most recently served as Assistant Secretary of State for Economic and Business Affairs from 2014 to 2017. Previously, he was U.S. Ambassador to France and Monaco, and before entering public service, Rivkin spent nearly twenty years in the creative sector as CEO of The Jim Henson Company and W!ldBrain.

“In today’s digital world, the mission and function of the MPAA are more important than ever” said Ambassador Rivkin. “Chris has done a great job, and I’m excited to work with the member studios to continue to expand the global market for entertainment content, while ensuring creators’ rights are respected around the world.”

“With entertainment and government in his background, Charlie is uniquely and ideally suited for his new post at the MPAA,” said Kevin Tsujihara, Chairman and CEO, Warner Bros. “His experience in creative affairs, business and policy making will be extremely valuable as the MPAA and its member studios navigate a rapidly evolving and increasingly complex global entertainment landscape.”

“There is only one Chris Dodd, and he will be greatly missed,” said Tom Rothman, Chairman, Sony Pictures Entertainment’s Motion Picture Group. “Charlie brings a wealth of experience to his role at the MPAA. From heading a production company to working at the State Department, he brings a perspective and skill set that will help him further the mission of the MPAA around the world.”

“I am fully confident Charlie is the right person to expand on Chris’ tremendous achievements of the last six years and forge new opportunities for the creative sector,” said Jim Gianopulos, Chairman and CEO, Paramount Pictures. “We look forward a seamless transition, ensuring the MPAA continues its successful work today and thrives in the ever-changing digital future of film and television programming.”