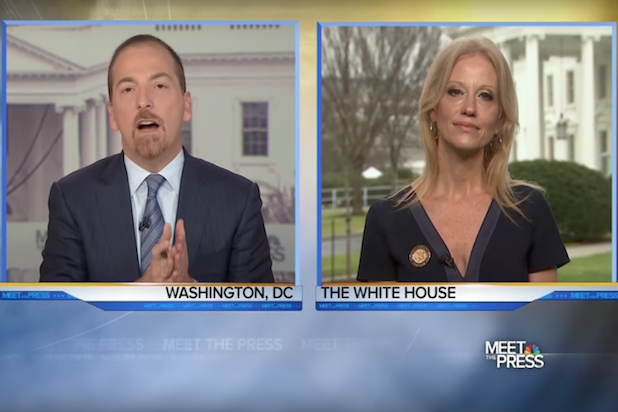 Chuck Todd, an NBC veteran and current host of “Meet the Press,” has had his share of blockbuster interviews. None however is probably more famous than his January 22 dustup with White House counselor Kellyanne Conway.

The moment came during a discussion of then-Press Secretary Sean Spicer’s infamous defense of Donald Trump’s inaugural crowd size and saw Conway’s creation of the phrase “alternative facts.” For many, the term has come to define the Trump presidency. Yet rather than a moment of triumph, Todd says he looks back on the interview with some level of regret over how he conducted himself.

“There’s times in that interview where I had facial expressions,” he told TheWrap. “You have to be careful.”

“That interview, I’ve played back in my head a million times,” he added.

Indeed, a review of the footage reveals quite a bit more than facial expressions. After Conway dropped the admittedly nonsensical term and insisted that it was impossible to accurately measure Trump’s inaugural crowd size, Todd couldn’t’ help but laugh off-camera. It was a moment Conway immediately pounced on.

The critique seems to have stung.

“In that sense that is one interview where it was a reminder that facial expression … you just got to be careful,” said Todd. “You send a message to viewers in many ways, words are just one of them.”

Alternative facts not withstanding, Todd has much to be happy about. At 45, he sits in the chair once occupied by reporting legend Tim Russert and bestrides the longest running television program in America. This year, “Meet The Press” celebrated its 70th birthday with a triumphal November 5 broadcast.

“It was 70 years ago tomorrow, on November 6th, 1947, 8 p.m. That’s right, 8 p.m., that the first moderator of Meet the Press, Martha Rountree, brought viewers what we called “America’s press conference of the air.” It was brought to you by Maxwell House coffee. Good to the last drop,” said Todd. The show also featured a dizzying array of clips from presidents, heads of state from years gone by.

The numbers back up the pageantry. In ratings, the show ranks number 1 against it’s rivals “Face the Nation,” “This Week” and “Fox News Sunday.” The 70th anniversary show saw 3.360 million total viewers and 936,000 in the advertiser-coveted A25-54 demographic.

With its outsize influence, the show has also drawn the attention of one very influential television viewer — Donald J. Trump.

While the president is primarily known for his voracious consumption of Fox News, it’s certainly not all he’s watching. Trump appeared on “Meet the Press” as a candidate in 2015 and back in 1999, during a widely dissected interview with Tim Russert.  Now in the White House, Trump is not shy about blasting the show and even christening Todd with one of his trademark nick-name: “sleepy eyes.”

When will Sleepy Eyes Chuck Todd and @NBCNews start talking about the Obama SURVEILLANCE SCANDAL and stop with the Fake Trump/Russia story?

Sleepy eyes Chuck Todd, a man with so little touch for politics, is at it again.He could not have watched my standing ovation speech in N.C.

Wow, sleepy eyes @chucktodd is at it again. He is do totally biased. The things I am saying are correct. – far better vision than the others

Sleepy eyes @chucktodd is an absolute joke of a reporter. He is in the bag for Obama. He can’t carry @jack_welch‘s jock.

“He loves it. It’s funny. That’s always what makes covering him so difficult,” he said. “When you think he’s at his most vicious, he will say ‘on no we were joking. Aren’t we all part of the game? All part of the system.'”