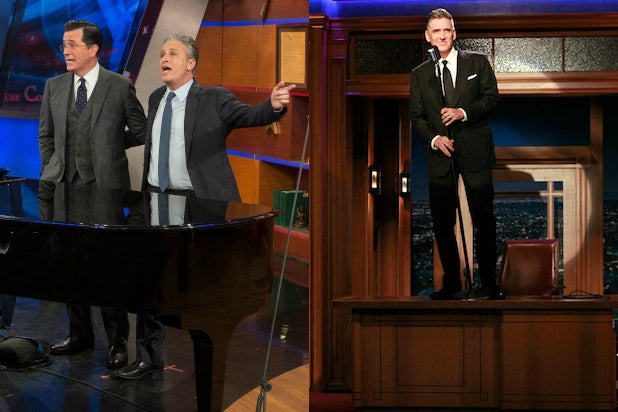 Both Stephen Colbert and Craig Ferguson said goodbye to their long-running late-night TV talk shows on Thursday, though CBS waited an extra day to air the latter.

At their respective Thursday tapings, “The Colbert Report” and Comedy Central went with a celebrity-filled version of Vera Lynn’s “We’ll Meet Again.” Meanwhile, Ferguson opened his last “Late Show” ever with a combination pre-taped and live “Bang Your Drum.” The taped parts had a ton of famous faces in it, while the live closing included a choir and Ferguson’s most-beloved nutty characters.

In closing down their productions for good, the two comedians followed Jimmy Fallon and Chelsea Handler‘s 2014 leads, putting a bow on their tenures with a Hollywood-infused musical number. Fallon finished his “Late Night” run in February by singing “The Weight” with The Muppets, while Handler closed “Chelsea Lately with a star-studded “We Are the World” rendition in August.

That all said, the biggest of late-night legends to leave a show this year, Jay Leno, elected for a more heartfelt, less sing-songy farewell in February.

So our question is: Who sang it best?

And watch Ferguson go out on top (of his desk):