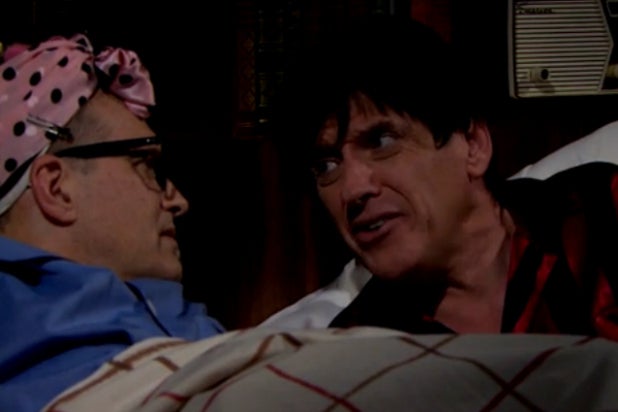 Craig Ferguson, the longest-tenured host of “The Late Late Show,” bid his staff and studio audience adieu at the Thursday taping, which aired on Friday night (technically Saturday morning, if you’re a stickler). TheWrap was at the taping, but one special moment was held back from both Ferguson’s final crowd and the press — until now, of course.

At the end of the final Ferguson show, after the Scottish comedian revealed TV legend Bob Newhart as the man behind pantomime horse Secretariat, the outgoing host awoke in bed, as his broadcast run since 2005 — and, we suppose, his entire career — was apparently all just a dream. Drew Carey was on the other side of the bed, something that was not shared with anyone outside of the Worldwide Pants production until the episode’s east coast airing concluded.

The ode to the classic “Newhart” sitcom ending contained a few pretty solid jokes, as well as an obvious nod to the final “Sopranos” episode and perhaps less-clear references to the conclusions of “The Drew Carey Show” and “St. Elsewhere.”

But, Ferguson’s farewell episode wasn’t all just goofing around. Earlier, the outgoing comic shared some poignant words right up front on his final show.

“I do want to say some things before I go,” Ferguson told his audience at Thursday’s taping. “Over the years, going with this show out and around, or going and doing stand-up with Josh, who works Geoff and is my partner in this show in many ways, I have come into contact with a lot of people who are viewers of this show. A lot of you I have come into contact, a lot of you I have met over the course of the years I have been doing this show and, although I have said my goodbyes to the crew here earlier on and I can’t thank them enough … the people that made this show are you.”

“You came to a show that was like, let’s be honest, a bit of a fixer upper and it kind of stayed that way, but it has … what I hope we’ve done is, maybe art is a very grand word … but what I was trying to do here and what I think that we have managed to do here is make something that wasn’t here before,” he continued. “So in that sense maybe it is a piece of art? It didn’t exist, now it does and you will be able to find it forever.”

“I think that what was more overwhelming, more than anything else in the experience of doing this show, was making a connection with a country, which I became a part of, which is astonishing to me,” Ferguson added. “And now, even in the course of this show, I became an American … officially, and particularly for my friends at the IRS, I am now a fully-fledged American.”

He concluded: “However what I can’t be is a member of a club that I didn’t ask to join … I wanted to do THIS show and now we’ve done this show and if you will indulge me in whatever I am doing now and come to whatever I do next, I’d be very grateful, because my kids are still young.”

Also Read: 9 of Stephen Colbert’s Best Moments From 9 Years of the ‘Report’ (Video)

“Into the Woods” star James Corden will replace Ferguson behind the CBS desk on March 9. During the transition period, Judd Apatow, Will Arnett, Wayne Brady and others will fill-in as guest hosts of “The Late Late Show.”