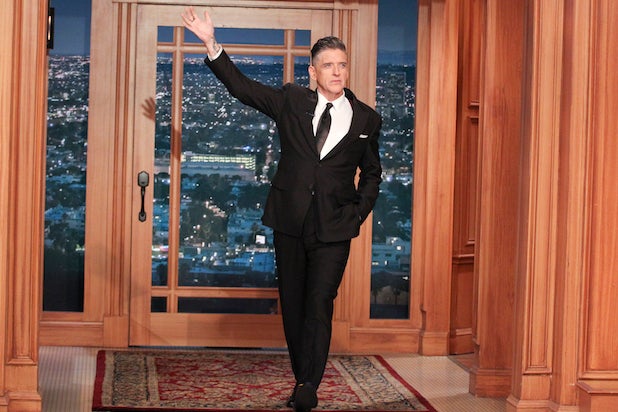 After 2,058 episodes, it’s still a great day for America, everybody.

Craig Ferguson beamed during the final episode of his run on CBS’s “The Late Late Show.” TheWrap was there for the taping of the episode, which will air Friday night.

Sidekicks, the human skeleton robot Geoff (voiced by Josh Robert Thompson) and pantomime horse Secretariat, were by Ferguson’s side for one last show. Through the decade, Ferguson has taken viewers to his native Scotland and on his journey to become a U.S. citizen.

“If they had done more of that,” said Ferguson, looking into the camera. “I probably wouldn’t have quit.”

Here are seven other reasons to tune in for Ferguson’s last “Late Late Show” hurrah:

1. “Bang Your Drum” one last time
Indie band Dead Man Fall, hailing from Ferguson’s native Scotland, opened the show with an updated rendition of their song “Bang Your Drum.” Dozens of stars such as Matthew McConaughey, Don Cheadle, Julia Louis-Dryefus, Ted Danson, Betty White and even Samuel L. Jackson (accompanied with mini Avengers figurines) join in for the send-off. Don’t blink or you’ll miss Archbishop Desmond Tutu feeling the rhythm on his own set of drums. The performance shifts into a live performance with Ferguson backed by a soulful choir.

2. “You have a collect call from… Jello Pudding?”
Ferguson answers his antique desk phone and talks briefly with “Bill Cosby” (wink, wink) who can’t stop talking about Jello pudding. The improv sends the audience into a fit of laughter, but prompts a head shake from a behind-the-scenes staff member.

3. F-Bombs
Last show, almost anything goes, right? Maybe not, at least not aired on television. Ferguson let a few f-words slip during the episode. Leno chimed in a few, too, much to the audience’s pleasure.

4. Sock game proper
Ferguson has worn almost every color and pattern of socks during his tenure, from argyle to bright red. During his “Check the Tweets” segment, he reclines in his chair and stretches his legs across the desk, revealing striped socks. It’s a toss up as to whether or not the green color leans more toward a Christmas or “chemical-ooze” shade ripped from a comic book.

5. Non-members of “The Late Night Snippy Club”
Ferguson’s chat with Leno is worth watching. Despite being the only guest, their exchange adds a nice touch to the segment. The pair come off as two friends catching up on life after years apart, from feeling like old men to more f-bombs. It’s a fitting exchange between the two after Ferguson surprised Leno, a car enthusiast, with a raggedy Ford Bronco for Leno’s last show earlier this year.

6. Pipey the Pipe
Ferguson introduced a new character to join the alligator stage puppet and Secretariat, Pipey the Piper. The wooden pipe on Ferguson’s death may be small, but has a snarky attitude.

7. The Final Act and…
Bob Newhart? The comedian and actor reveals himself as behind Secretariat in a dream sequence Ferguson wakes up from to awake his mysterious wife. Producers remain tight-lipped on how the scene pans out and will have to be watched to see if there’s another big surprise appearance — taped earlier, so even we’re in the dark.