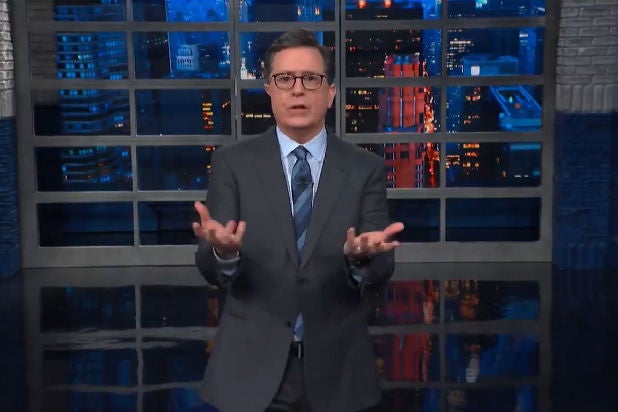 On Thursday’s “The Late Show,” Stephen Colbert was still pretty frustrated by U.S. Attorney General Bill Barr’s assertion that the Mueller report fully exonerated Donald Trump. But with the news that congress wants to see the full report rather than just Barr’s summary, Colbert decided “it’s time for us to get our hopes up again.”

“I know you’re not supposed to judge a book by its orange, leathery cover,” Colbery joked. “But for almost three years I’ve had to read all of Trump’s tweets. All his staff’s indictments. A hundred and twenty seven tell-all books. And none of them told us anything we didn’t already know just from looking at him.”

Colbert said he hoped we’d learn everything we needed from the Mueller report, only it wasn’t released and we have to take Barr’s word for what it contains. Barr has only released a three-and-a-half page summary of the nearly-400 page report, which, Colbert said, is like “tuning in to see the new season of ‘Game of Thrones,’ and it’s just Barr holding up a sign that says ‘dragons did some stuff, the end.'”

Colbert then brought up the plans by House Democrats to subpoena the whole report. “You know what that means, folks? It’s time for us to get our hopes up again.”

“Maybe the full report will show up to our school play.”

Watch the whole clip below.

TONIGHT: Did Barr allegedly leave out damaging details to Trump in his summary of the Mueller report? The answer…won't surprise you. #LSSC pic.twitter.com/iHiRFVFQFr