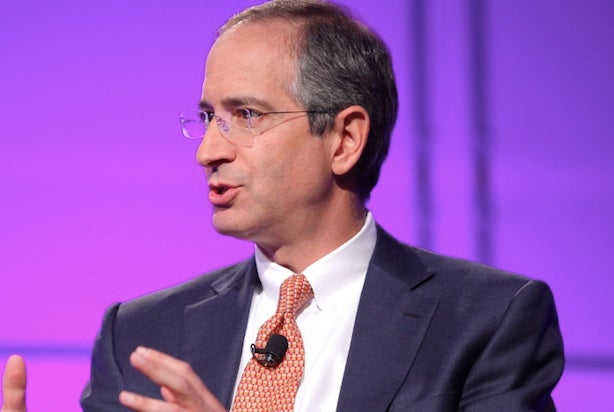 Netflix will not be coming to a Comcast set-top box anytime soon, top executives at the cable and media giant told analysts on Wednesday.

“It’s not really a high priority for us,” Comcast Cable CEO Neil Smit said. “We have nothing to report on the Netflix front.”

The remarks came as Comcast reported its third quarter earnings.

Smit said he was amazed by the amount of media scrutiny surrounding the possibility that Netflix would be integrated into cable boxes, and stressed that there were a number of ways Comcast subscribers can already access the streaming service’s content without offering an app.

Earlier this month, the Wall Street Journal reported that Netflix was negotiating with cable companies like Comcast and Suddenlink to make its video streaming app available on their set-top boxes. Smit said the company had already integrated apps for services like Pandora into its X1 operating systems, and was “open” to doing the same with Netflix.

Netflix, with its hours of movies and television shows and substantially lower price, is often seen as a rival to cable operators and a potential incentive for consumers to cut the cable cord.

Networks prefer Netflix to Aereo because Netflix makes deals with networks to stream their shows. Aereo, in contrast, streams live television through a network of tiny antennas. It is being sued by Comcast’s NBC and other broadcasters who consider that stealing. Aereo counters that the airwaves are publicly owned.

Earlier this month, the broadcast networks asked the Supreme Court to weigh in on their case against Aereo.

“We think what they’re doing is unlawful,” NBCUniversal CEO Steve Burke said, noting that the company was sidestepping paying retransmission fees that cable companies shell out. “We’ll see what happens with the lawsuit, but we think it’s a clear violation of the law.”

Comcast Chairman Brian Roberts also offered kind words for a rival, Time Warner Cable CEO Glenn Britt, who told his employees on Tuesday that he has been diagnosed with cancer for a  second time.

“We wish you the best as you battle that tough disease,” Roberts said.

For the record: An earlier version of this article misstated that Brian Roberts made remarks about Aereo that should have been attributed to Steve Burke.