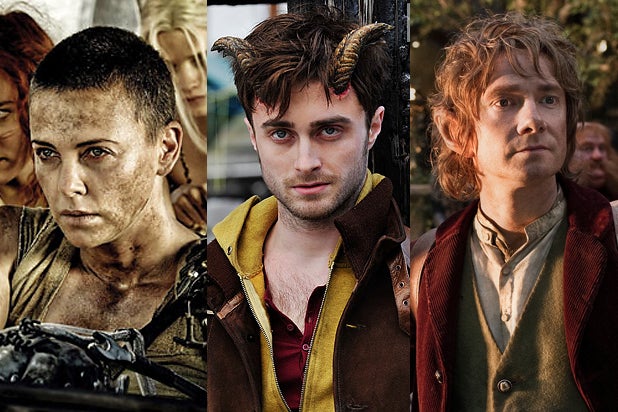 It’s not summer without Comic-Con, and this year there’s a ton of chances for fans to indulge in their favorite films, TV shows and comic books — among other pop culture phenomenon — at the San Diego Convention Center.

This year’s festivities kicks off with Preview Night on July 23. Here’s a breakdown of the movie panels and events fans can look forward to (which will be updated as new information becomes available).

12:30-1:30 p.m. — “Goosebumps” / “Pixels” (Sony)
Get your first look at two of next summer’s most anticipated films. First, Scholastic’s iconic book series Goosebumps, written by R. L. Stine, has already captured the world’s imagination-selling over 400 million books worldwide. Now it’s coming to the big screen, with Jack Black starring as the author himself and Rob Letterman directing. Jack and Rob will tell you all about how Stine’s monsters are coming to life on the big screen. The film hits theaters on August 7, 2015. Then, stay tuned as director Chris Columbus has a special video announcement about his upcoming film Pixels, starring Adam Sandler (in theaters May 15, 2015)-you’ll find out how one lucky Comic-Con badge-holder might win a chance to be a part of the movie. Indigo Ballroom

1:30-2:30 p.m. — “The Giver” (The Weinstein Company)
Twenty years in the making, fans of the novel can rejoice: The Giver is coming to the big screen. The Weinstein Company and Walden Media will premiere exclusive footage from the upcoming film with stars Jeff Bridges, Brenton Thwaites, Odeya Rush, director Phillip Noyce, and bestselling author Lois Lowry. Hall H

3:00-4:00 p.m. — TBA (Paramount Pictures)
Paramount Pictures will provide an inside look at their upcoming films. Attendees will view exclusive footage presented by special guests and hear the latest news for some of the year’s most anticipated movies! Hall H

6:00-7:00 p.m. — “Goonies” Never Say Die
With Richard Donner’s announcement that a sequel to his beloved 1985 classic The Goonies is on the way, join Goonies cast members to explore how it became an iconic movie for an entire generation, why the film has stood the test of time, and possible insights into the much anticipated sequel. Clare Kramer (Buffy the Vampire Slayer) moderates a panel of cast members and special surprise guests, including a Q&A session. Indigo Ballroom

Peter Jackson will be on the main stage to promote the “Hobbit” finale, while director George Miller will be on hand to present a first-look at the “Mad Max” update starring Tom Hardy and Charlize Theron. The Hall H audience will also get a peek at the Wachowskis’ original sci-fi action movie “Jupiter Ascending,” New Line and MGM are partners on “The Hobbit,” as is Village Roadshow on “Mad Max” and “Jupiter Ascending.” Attending stars will be revealed at a later date. Hall H

1:30-2:30 p.m. — “The Boxtrolls” (Focus Features)
Focus Features presents The Boxtrolls, a new family event movie from LAIKA, the creators of Coraline and ParaNorman, that introduces audiences to a new breed of family- The Boxtrolls, a community of quirky, mischievous creatures who have lovingly raised an orphaned human boy named Eggs (voiced by Isaac Hempstead Wright of Game of Thrones) in the amazing cavernous home they’ve built beneath the streets of Cheesebridge. When the town’s villain, Archibald Snatcher (Academy Award winner Ben Kingsley), comes up with a plot to get rid of the Boxtrolls, Eggs decides to venture above ground, “into the light,” where he meets and teams up with fabulously feisty Winnie (Elle Fanning). Together, they devise a daring plan to save Eggs’ family. Appearing in person are actors Ben Kingsley, Isaac Hempstead Wright, and Elle Fanning; producer and lead animator, LAIKA president and CEO Travis Knight; and directors Anthony Stacchi and Graham Annable. Hall H

2:50-3:50 p.m. — “Sin City: A Dame to Kill For” (Dimension Films)
Dimension Films in association with Aldamisa Entertainment present exclusive footage from the highly anticipated sequel Frank Miller’s Sin City: A Dame To Kill For from acclaimed co-directors Robert Rodriguez and Frank Miller. Fans will get to experience the Sin City universe and take part in a special discussion with Rodriguez, Miller, and cast. Hall H

3:00-4:00 p.m. — “AIR”
Robert Kirkman (The Walking Dead) and his producing partner David Alpert (The Walking Dead) discuss Skybound’s journey into television and film beyond The Walking Dead series. The panel will feature an exclusive, never-before-seen teaser of Skybound’s first feature film, AIR starring Norman Reedus (The Walking Dead), a co-production with Automatik Entertainment (Insidious franchise) that has been acquired by Sony Pictures Worldwide Acquisitions. Reedus will join the panel to discuss the making of AIR and what it was like to work with Kirkman and Alpert outside of The Walking Dead. Director Christian Cantamessa (Red Dead Redemption) will also be present. Skybound’s newest division, Skybound Interactive, will also share their upcoming slate of games including news about the critically acclaimed game The Walking Dead by Telltale. Room 6A