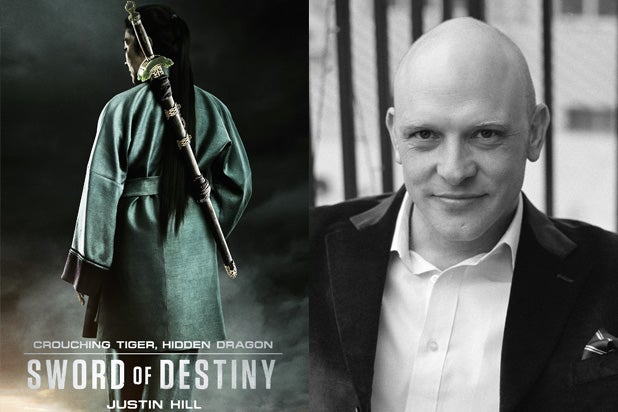 So runs the usual response to a movie adaptation. Stuff gets cut, favorite scenes left out, it’s just not how you imagined it — so it’s unusual to be given a script and asked to turn it into a novel. (The writer panics: Will it be as good as the film?)

In the spring of 2014, I had an email from my editor asking if I’d be interested in writing “Crouching Tiger Hidden Dragon: Sword of Destiny.”

“There’s a script adapted from the original novels,” he told me.

I was halfway through another novel and living in Hong Kong at the time, and two days later a registered package arrived with a nondisclosure agreement and a precious copy of a major Hollywood script with my name emblazoned across every page. I locked myself in my office, and started to read, and the first thing I noticed was that a script is so bare. I was like a forensic expert getting a skull and slowly, painstakingly having to reconstruct the face, muscle by muscle. I started to have an idea of just how much work I would have to do to fill in all the white spaces that actors, makeup, special effects and directors fill in.

How did I get chosen to write this? Well, my wife said: “They want an author who can communicate China well, write page-turners and who’s got a track record of writing historical Chinese settings, which in my reckoning makes a shortlist of one: you.” Not entirely true, but there wasn’t a long list of people, and I knew the agent of the Wang Dulu estate, and she’d suggested me. “China’s your second home,” she said to me. “You’ll be fine.”

I certainly knew China well, having landed in the small rural town of Shanxi Province in the winter of 1992, fresh from university. In fact, I’ve spent most of my adult life in China, mostly in small rural areas, and it was those experiences that I drew on to bring this novel to life.

In the ’90s there were still parts of China that had changed little since the Communist Revolution in 1949, or even the fall of the Qing Dynasty in 1911. I remember cycling 30 miles (people used to cycle in China, you know) to the house of one student whose village had just gotten electricity. She lived in a traditional Chinese compound, and her father had one light bulb, and followed us about from room to room, unscrewing it and screwing it in with great ceremony.

“You’re the first foreigners to visit my village since the Japanese left in 1945,” she told us.

Novels and films are very different mediums so I knew this book would have to stand on its own. My first job was to become an expert on the work of Wang Dulu. A simple translation of his work was not possible for a number of reasons. One was that the story had been altered for the original film, meaning there were characters who died in that film who did not die in the books. But I went back to the whole Iron Crane Series, originally five books, and tried to bring parts of the story back that had been cut in the making of both films.

Three of my first four books were set in either modern or Tang Dynasty China, and I thought my China writing days were over. All changed when I sat down to read the script. The world of “Crouching Tiger, Hidden Dragon” is set in a period of Chinese history that is both familiar and foreign. It is a semi-fantasy setting, with strong historical roots, in many ways similar to “Game of Thrones” where fantastical things can happen, but most of the time the laws of the world are the same as we live in now.

As a writing project, though, it exploded what I knew about writing. I’ve never been a planner. I’d never worked with anything more than a hazy outline of the way ahead and I’d never planned a novel almost scene-by-scene, or known the ending before I got there. But I found the collaborative nature of this, working in a sense with two writers looking over my shoulder — John Fusco, who wrote the script, and Wang Dulu himself — a real pleasure.

I started writing the novel before filming started, but I was very conscious all along that it would have to tie in with the film, so was very diligent keeping up with news from the studio as they found various actors to fill the key roles. It wasn’t so much making the book characters look like the “real-life” ones, as making sure the descriptions didn’t clash.

I immersed myself in the original film. I had Tan Dun’s brilliant theme music on repeat for hours as I wrote, and I went back to all the old Chinese masters like Wang Wei and Du Fu to get the right way of thinking, feeling and emoting. It was fabulous to go back to China and play with the landscapes, characters and descriptions.

Writing this book was in many ways a homecoming for me, as well as an homage to a place I have loved as well as my home. If at the end, someone says of the book.”It’s as good as the film,” then I’ll be delighted.

View In Gallery
BIO Justin Hill
Justin Hill has lived in, worked and written about China for most of his adult life. His books have been translated into 15 languages, nominated for the Man Booker Prize three times and received many other awards and honors. He lives in the U.K.

Justin Hill has lived in, worked and written about China for most of his adult life. His books have been translated into 15 languages, nominated for the Man Booker Prize three times and received many other awards and honors. He lives in the U.K.