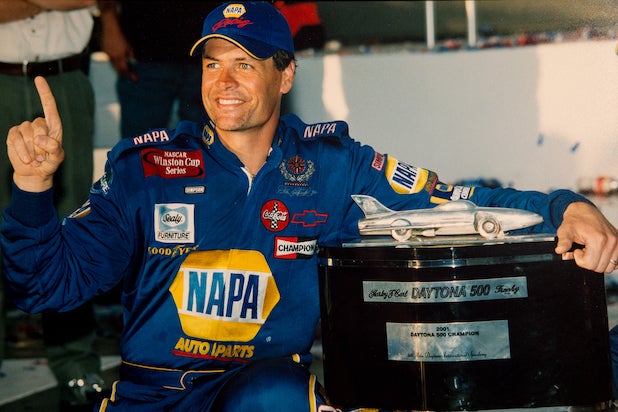 The NASCAR documentary about drivers Michael Waltrip and Dale Earnhardt Jr., “Blink of an Eye,” has been acquired by 1091 and a feature film adaptation is in the works, the company announced Wednesday.

“Blink of an Eye” is directed by Paul Taublieb and focuses on Waltrip’s relationship with Dale Earnhardt Sr. Roger Birnbaum, with whom Taublieb produced the 2014 film “The Vow,” will develop the documentary into a dramatic feature.

1091 will release “Blink of an Eye” theatrically and on demand this fall following a private screening at the NASCAR Hall of Fame Theater in Charlotte, North Carolina on May 24.

Based on the New York Times bestselling book of the same name, “Blink of an Eye” shows how across 462 races, Waltrip amassed an all-time record losing streak before joining Earnhardt Sr.’s race team for the 2001 Daytona 500. Waltrip held the lead while Earnhardt Jr. took second and Earnhardt Sr. took third, blocking the other field of racers from advancing and allowing Waltrip his first checkered flag. But Waltrip never got the chance to thank him, as the legendary driver was killed in what was thought to be a minor crash on the race’s last lap.

“Blink of an Eye” features interviews with Waltrip and Earnhardt Jr. along with Ty Norris, the former executive vice president of Motorsports for Dale Earnhardt Inc., and NASCAR Hall of Famers Richard Petty and Richard Childress, as well as an audio cameo by country music star Trace Adkins.

“‘Blink of an Eye’ touches a much wider audience than NASCAR fans, it is a story of perseverance and friendship that anyone can relate to,” Danny Grant, Senior Vice President of Film and Strategic Partnerships at 1091 said in a statement. “Paul Taublieb does a fantastic, cinematic job with this long untold story and we are excited to partner with Taublieb Films and Monster Energy, along with the support of NASCAR, in bringing this film to theaters and homes nation-wide.”

“I’m humbled Michael Waltrip placed his trust in me to tell his heartfelt and inspiring story in such intimate fashion, yet on the large canvass of cars going 200 miles an hour. ‘Blink of an Eye’ is the most compelling sports story never told, and one that transcends sports,” Taublieb said in a statement.

The deal was negotiated by 1091’s Danny Grant and Taublieb on behalf of the filmmakers and Waltrip. “Blink” was produced by Taublieb Films with support from Monster Energy and in association with NASCAR, with NASCAR’s Steve Phelps also serving as an executive producer.