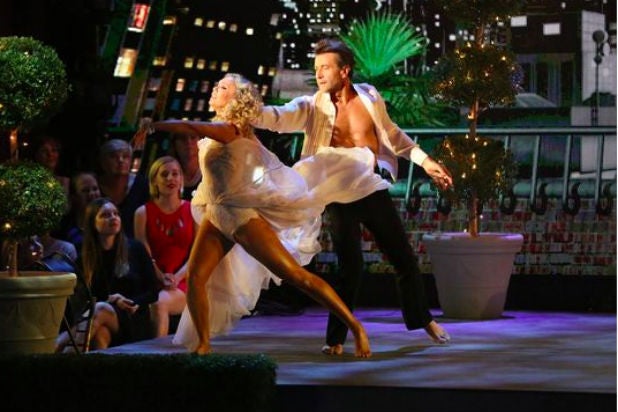 (Spoiler alert: Please do not read on if you haven’t watched Tuesday’s episode of “Dancing With the Stars”)

After having two chances to impress the judges on Monday, two couples were sent home Tuesday on the first results show of the season.

Rumer Willis and Val Chmerkovskiy got a perfect score so it was no surprise that they were safe, but unfortunately “Shark Tank” personality Robert Herjavec wasn’t so lucky.

“You may not have won a Mirror Ball trophy but I am suspecting you won someone’s heart,” Tom Bergeron said, referring to the steamy kiss between Robert and Kym Johnson the night before.

With Noah Galloway, Riker Lynch and Chris Soules all also at risk, ultimately it was the former “Bachelor” star who didn’t get given a rose. “This has been an incredible experience … I came here and did something I’ve never done in my entire life,” Soules said, fighting back the emotion.

Earlier in the show, ESPN personality and former contestant Kenny Mayne was back for a special edition of spoof “DanceCenter” with the help of NFL star Jerry Rice and judge Len Goodman.

Mayne analyzed the contestants with the same cutting wit he uses for sports coverage, saying Soules has “kindergarten math skills” and that Lynch was like the love child of “David Lee Roth and the Hanson Brothers.”

Tuesday’s episode also included a special performance by Carly Rae Jepsen, singing her latest catchy tune “I Really Like You.”

Nastia Liukin and Derek Hough, Willis and Chmerkovskiy, Galloway and Sharna Burgess, and Lynch and Allison Holker will all now head to the semi-finals next week.

“Dancing With the Stars” returns to ABC on Monday at 8 p.m.