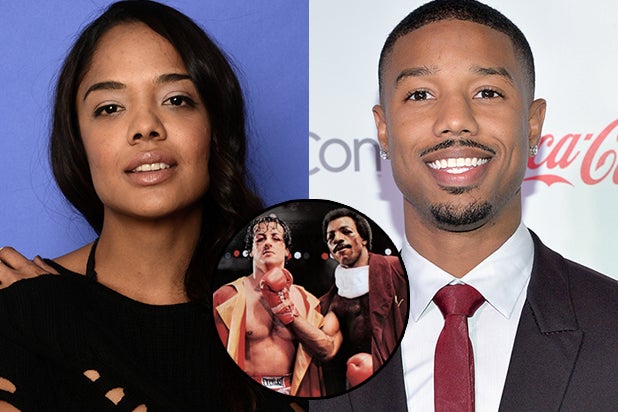 Tessa Thompson’s breakout year continues as the “Dear White People” star has now landed the female lead in “Rocky” spinoff/sequel “Creed,” an individual with knowledge of the project told TheWrap.

Sylvester Stallone is reprising his iconic role as boxer Rocky Balboa, but “Creed” will center on Michael B. Jordan‘s character, the grandson of Rocky’s nemesis-turned-mentor Apollo Creed.

This time around, Balboa will act as a trainer to the young Creed.

The film will also mark a “Fruitvale Station” reunion for Jordan and director Ryan Coogler, who will helm the project.

The plot is still under wraps, though it will center on Jordan’s character, who essentially overcomes a privileged childhood — his famous boxing grandfather died in “Rocky 4″ but left a fortune behind — to discover his own pugilistic prowess. He seeks a trainer in Balboa, who’s not too keen on getting back into the fight game.

Also read: ‘Selma’ Review: Martin Luther King Gets His Cinematic Due in a Stirring American Saga

Thompson broke out as the lead in the Sundance hit “Dear White People,” for which she recently won the Gotham Award for Breakthrough Actor. She also has a role in “Selma” and has wrapped the indie “The Prop Is the Girl.” She is represented by Greene & Associates and Mosaic.