Actor-writer-director-artist Dennis Hopper, whose iconic roles ranged from “Rebel Without a Cause” to “Blue Velvet” to the cable series “Crash,” died Saturday of prostate cancer. He was 74. 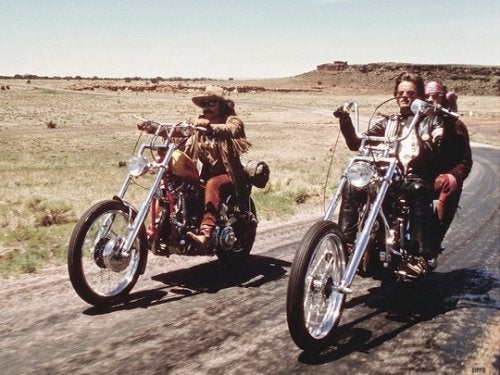 Hopper appeared in films ranging from teen melodramas to westerns to psychedelia to Oscar-winning dramas, but was probably best known for writing, directing and starring in the iconic “Easy Rider.”

Born in Dodge City, Kansas, in 1936, Hopper early on expressed an interest in acting. He got his start in television, appearing in numerous shows in the 1950s, including “Medic,” “Cheyenne” and “Sugarfoot.”

He made his film debut in 1954's “Johnny Guitar,” directed by Nicholas Ray.

In part to break out of his teen roles, Hopper studied at the Actors Studio. However, his improvisational technique and demand for multiple takes while shooting Henry Hathaway's “From Hell to Texas” didn't endear him to the cast and crew, and eventually he found himself unemployable.

He managed to land some undistinguished movie and television roles throughout the 1950s and well into the '60s.

After a noteworthy role in Hathaway's 1965 “The Sons of Katie Elder,” starring John Wayne, Hopper was on the road to a comeback.

Hopper wrote the road movie with his co-star Peter Fonda and screenwriter Terry Southern, and he also directed. Made for what they could scrape together – about $400,000 – “Easy Rider” became a huge box office hit and spawned a raft of imitators, low-budget movies about hippies and rebels and the like. It also earned a screenwriting Oscar nomination.

However, Hopper's next directorial effort, 1971's “The Last Movie,” was much less successful, both critically and financially. Hopper has said he was consuming large quantities of mind-altering substances at the time, which affected the quality of his work.

He spent most of the '70s working on European films, returning to the U.S. spotlight in Francis Ford Coppola's 1979 epic “Apocalypse Now,” winning good reviews for his portrayal of a pot-smoking photographer.

In the first half of the 1980s, Hopper found acclaim in a series of supporting roles in films including “Rumble Fish” and “River's Edge.” His most memorable performance of the decade came in David Lynch's “Blue Velvet” (1986), as the foul-mouthed, oxygen-sucking, sinister Frank Booth.

Also in 1986, Hopper earned a supporting actor Oscar nomination for “Hoosiers,” in which he co-starred as the basketball-loving town drunk who helps coach Gene Hackman revive the local high school team's fortunes.

In his later years, Hopper portrayed a wide range of offbeat, often criminal characters in films ranging from “The Last Days of Frankie the Fly” to “Red Rock West” to “True Romance” to “Speed.” On TV, he appeared in Fox's “24,” where he played the sadistic Victor Drazen, and more recently in the Starz original series “Crash.”

He also continued to direct occasionally, with his most acclaimed film being the 1988 Sean Penn starrer “Colors,” about Los Angeles' gang culture. Other directing credits include “Out of the Blue” (1980), “The Hot Spot” (1990) and “Chasers” (1994).

In addition to his film and TV work, Hopper was a noted photographer, painter and sculptor. In 2001, Amsterdam's Stedelijk Museum devoted a show to about 100 of his works dating back to the mid-1950s. At the time, Hopper told the BBC, “It is the most important thing that ever happened to me, to be here at this museum.” 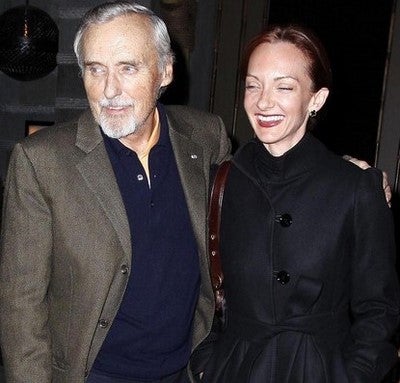 Hopper was married five times, including to actress Katherine LaNasa and, most recently, to Victoria Duffy (left). He made headlines earlier this month when, extremely ill with cancer, he filed for divorce from Duffy. In her response, in which she requested full custody of their 6-year-old daughter, Duffy also cited irreconcilable differences as the reason for the divorce.

There were reports that Duffy was a spendthrift and that the rift between her and Hopper had to do with her share of his estate. Other reports suggested that Hopper's oldest daughter, Marin, was the instigator of the divorce.

Hopper had credited Duffy with helping him to get clean after years of abusing drugs and alcohol.

It started when he was 18, smoking peyote with Dean on the set of “Rebel Without a Cause.” And it continued until 1983, when the hallucinating Hopper was found wandering naked in the woods in Mexico. While being flown home to Los Angeles, he reportedly tried to climb out of the moving plane.

He checked into rehab and reportedly had been sober for 30 years.

They divorced and Hopper married singer Michelle Phillips of the Mamas and the Papas; that union lasted eight days before being annulled.

He also was married to dancer/actress-turned-psychologist Daria Halprin (“Zabriskie Point”).

Hopper has four children, a son with LaNasa and daughters with Hayward, Halprin and Duffy.

Hopper Draws a Crowd for Walk of Fame Star

Who Says There Are No Second Acts? Malcolm McLaren and Dennis Hopper